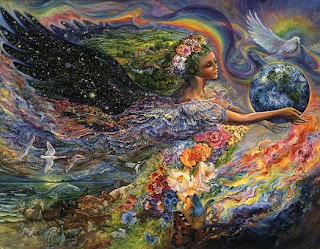 Earth Angel by Josephine Wall
Falling in the cardinal water sign of Cancer, the Total Solar Eclipse of 11th July, reminds us, once again, that Cancer is the only Cardinal sign not represented in the current T-Square of Jupiter, Saturn, Uranus and Pluto.
In fact, since the T-Square began to form in 2008, with the entry of Pluto into Capricorn and the start of the Saturn-Uranus Oppositions, there have been (and will be) a number of Solar and Lunar Eclipses in the sign of the crab and in its opposite sign, Capricorn the goat (details at the end).
This I find very interesting. If you consider that the effect of an Eclipse lasts around six months of so, we are pretty much consistently under the auspices of powerful Cancer-Capricorn eclipsed lunations for the duration of the T-Square.
Cancer is ruled by the Moon, the feminine, nurturing, lunar archetype and Capricorn is ruled by Saturn, the masculine authority, the limit-setter, old father time. The Cancer-Capricorn axis is to do with mother and father and the parental archetype in general. It’s also to do with the balance between home and work and about our roots, our early home life and the authority figures we encountered there. It’s how we were nurtured and how from that point we branch out into the world to acquire our own standing, status and reputation, in the process becoming parents and authority figures ourselves.
In essence, this axis is about where we come from and where we’re heading towards and the intricate, inseparable relationship between those two places. Both Cancer and Capricorn need to feel safe and secure. For Cancer the emphasis is on emotional security and nurturing and for Capricorn, the emphasis is on worldly, material security.
Both signs, in their own ways need to learn to set healthy boundaries and together, they can show us the way to find the balance between a healthy emotional life and a secure material life. Finding this Cancer-Capricorn balance is all important, if we are to avoid collectively and individually slipping into the shadow expression of these signs.
The shadow side of Cancer is needy, over-protective and emotionally manipulative. Nothing new can be learnt from this position. Rather, the emotions become stagnant and turn in on themselves, with ever diminishing returns.

The shadow side of Capricorn is rigid, over-structured and cold. Making progress in the so-called real world is the only thing that matters. Integrity, other people’s safety and security and taking responsibility for our actions goes out of the window.

In the shadow side of both signs, the world is a harsh, difficult, dangerous place. In this expression of the two signs, the energies can’t flow naturally, they are blocked and squashed and transmuted into something which can harm rather than heal and we are locked in a compulsive pattern of doing what we feel we need to do in order to ‘survive’.

Pluto in Capricorn is collectively urging us to unearth, reveal, purge and transform the Capricorn shadow. Just looking at the state of world’s economies right now is all the evidence we need to suggest we have let ourselves fall into the Capricorn shadow. It’s also evident in the way we have been raping our earth and our ocean’s resources. It is now totally clear that the way we have been doing things is totally unsustainable. Doing something about it is up to all of us.


Cancer, the missing element in the T-Square, points us in the right direction, demonstrating through its relationships with Capricorn that finding the right balance is key. Mother earth is plentiful, she has enough to go around, but her abundance needs to be honoured, respected, shared and replenished, not plundered for profit, never mind the consequences. 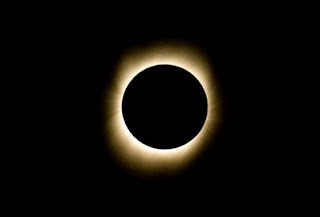 Eclipse Image: Credit Nasa
So, at the time of the July 11th Cancer Eclipse and indeed beyond, I will be considering all these themes and meditating on the balance and the light in the Cancer-Capricorn axis.
Looking specifically at this Eclipse, at first glance, the New Moon in Cancer doesn’t connect with the T-Square, in way that it did during the Capricorn Lunar Eclipse on 26th July (which formed a high energy Grand Cross with the T-Square), but if you look closely you will see that it does in fact make a Quindecile (165 degree) aspect with Pluto in Capricorn (see the chart below – also shown is the chart showing all the planets). 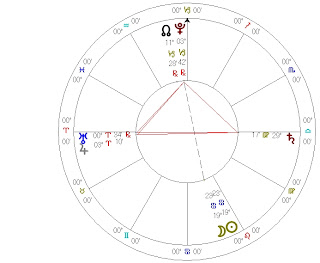 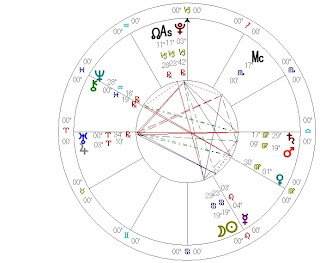 If you don’t use the Quindecile, it’s worth investigating. Noel Tyl counts the Quindecile as a major aspect and describes it as “an aspect of unrelenting motivation, obsession, determination, upheaval, disruption, even separation”.
Between the Sun and Moon in Cancer and Pluto in Capricorn, this aspect speaks of an intense drive for power, of the urge to achieve goals through the use of control and manipulation, of planting seeds of fear and insecurity. At best however, this powerful connection between Pluto and the Eclipse, gives us the collective opportunity to disrupt and upset that pattern, to expose it for what it is and demand a healthier, more balanced way of being. It also gives us a collective and individual opportunity for self evaluation, for purging old emotional wounds and facing our insecurities.
As I have said on this blog many times before, we seriously need to redress the balance between the masculine and the feminine, the inner and the outer, the yin and the yang in our individual and collective lives. We need to honour the sacred feminine spirit, nod to the goddess and respect mother earth.
These years we are living through are a real opportunity for a positive shift in mass consciousness. Let’s not waste them.
My very first blog post here at Astroair dealt with this very same topic ~ an Eclipse in Cancer and the Cancer-Capricorn dynamic and here I am reiterating it again. Is it a coincidence that this blog celebrates its 1st birthday on the day of this upcoming Cancer Solar Eclipse?
With love,
Mandi
http://www.mandilockley.com/


What is the general meaning of an Eclipse?
Eclipses are very dramatic events to observe, as those lucky enough to have witnessed a Total Eclipse of the Sun or watched a Lunar Eclipse on a clear night as the Moon disappeared behind the shadow of the Earth, will verify. However, you don’t need to directly experience an eclipse for its symbolism to reflect in your personal experiences. The old adage as above, so below, stands firm. That said it is difficult to predict exactly what will happen when an eclipse touches your personal astrological chart. Their effects are sometimes exciting, sometimes stressful, often passing by without having any sort of obvious effect at the time, only to manifest as an event some weeks later. In most general terms though, eclipses represent endings and new beginnings, times when the light goes out and something is taken away, creating a space for something new to germinate. If a particular Eclipse falls on a planet or point in your natal chart and you want to work consciously with the energies, they are good times for beginning the process of releasing, letting go of outdated, worn-out emotional baggage and planting the seeds of new beginnings. For some more astrological ideas on how to work with eclipses see Working with Eclipses.

Will this Eclipse Affect You?
The July 11th Eclipse will be particularly relevant to you if you have a planet or angle between 17 and 21 degrees of Cancer or Capricorn. In particular, if it's your birthday between 10 and 12th July this is a powerful eclipse indeed and the potential for major change is in the air for you. If you do not know if you have planets or angles in the relevant degrees and/or signs you can quickly download your own birth chart which will provide you with this information in a simply understood way at http://www.alabe.com/