I can’t think of Nelson Mandela without the Free Nelson Mandela tune popping into my head. Released in 1984, it was a protest song against his imprisonment for opposing the apartheid South African government.

Mandela has a Moon-Uranus Square in his birth chart, an aspect of freedom, independence and rebellion. In Mandela’s case, his early years were nothing less than a rebellion against his mother country. Moon-Uranus is not an aspect you would expect to suit someone who spent 27 years incarcerated. And it’s not. But Mandela was a political prisoner and with his Moon in tenacious, unyielding Scorpio, he never gave up on his ideals. Eventually, his time inside became an act of protest in itself and this no doubt helped to sustain him.
The Moon falls in the 12th, the house associated with imprisonment. With this placement comes the need to feel and understand sacrifice, to serve, to surrender oneself to something greater, but with the Moon in Scorpio in its Fall, this happens the hard way, the long- winded way. He needed to hold fast to the courage and strength of his convictions. Notice that the Moon also Squares Mercury and Saturn in Leo in the 9th House. This is an aspect pattern which suggests a stubborn adherence to one’s highest ideals and the patience required to do so. It also suggests internationalism (9th House) and it was in part due to mounting anti-apartheid pressure from abroad that Mandela eventually regained his freedom.

Mandela’s Sun in Cancer falls in his 8th House. An 8th House Sun draws its energy from deep inner resources. 8th House Sun people can feel socially isolated, literally in Mandela’s case for 27 years of his life. It is, however, through the experience of isolation and also through the experience of crisis that Sun in the 8th people can eventually find the strength to emerge from the shadows transformed and able to live life in full light. And Mandela did this to the max. It wasn’t enough for him or for the world for him just to be free. He was the leader of a banned political party, the ANC, before he went to jail and within a few years of his release, as the leader of a now legal ANC, he was elected as the first black president of South Africa. This also fulfilled the higher promise of Mercury-Saturn in Leo in the 9th square Moon in the 12th and widely opposing Uranus in Aquarius in the 3rd.

The astrology is neatly summed up in the titles of his two of his books, The Struggle is My Life and Long Walk to Freedom as do the following quotes:

For to be free is not merely to cast off one’s chains, but to live in a way that respects and enhances the freedom of others.

There is no easy walk to freedom anywhere, and many of us will have to pass through the valley of the shadow of death again and again before we reach the mountaintop of our desires.
A Sun-Moon Trine suggests a personality that needs to feel at peace with itself. It can be a remarkably strong willed aspect when it comes to getting what it wants, but has a veneer of amiability that tends to make people with this aspect popular and easy to get along with. 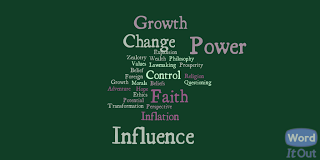 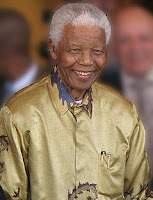 Mandela also carries a generational Jupiter Conjunct Pluto in Cancer aspect in his chart. It falls in his 7th House and therefore speaks of his public persona, how he is received by others. The conjunction is the start of a whole new cycle for these two planets. The graphic above includes the major themes of the alignment and all of them are easy to relate to Mandela’s life. It’s associated with a deep questioning of received values, morals and ethics; power struggles, shifts in power and the desire for power; wealth and influence; faith and belief; zealotry; the emergence of new philosophies; the powerful urge for change and being a law unto oneself. Certainly, Mandela has become a totem for these
qualities, acting them out, bringing them into the world.   This is helped along by the fact that Jupiter sits on the private becomes public Aries point, with its placement in the 7th House making a double whammy of thrust towards the public arena. Where the personal comes in is from is a very tight Sesquiquadrate between the Moon and Pluto and a tight Mercury-Jupiter Semisquare. His public facing side is further underlined by the presence of Venus on his 7th House cusp. In double sided Gemini, it represents on the one hand the immense public popularity and positive acknowledgement he has come to enjoy and on the other hand, given that Venus Trines Uranus, it is an indication of how the attention he received riled and threatened the establishment in his early career.

The 27 years he was in jail represents pretty much an entire Saturn cycle. It is fitting that transiting Saturn was opposing his natal Neptune at the start of his incarceration in August 1962. Additionally, transiting Pluto and Secondary Progressed Sun were just past his MC. This transit marks out this time as a major milestone period in his life, suggesting a significant shift in status.


On his release in February 1990, transiting Pluto had just entered his 12th house, Squaring his 9th House Mercury-Saturn conjunction and widely applying to conjunct his Moon. These transits are a symbol of needs and ideals powerfully transformed and given power.

In 1993, he was awarded the Nobel Peace Prize, jointly with Frederik Willem de Klerk (South 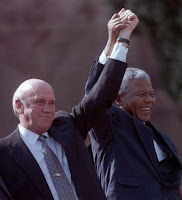 Africa’s last apartheid-era President), for their work towards the peaceful termination of the apartheid regime. Mandela's transits for the December ceremony include healing Chiron on the MC and Saturn conjunct natal Uranus, marking a zenith moment for the rebel being embraced by an old order (represented by de Klerk) who were finally embracing the powerful forces of change. There was also a rather fitting buildup of transiting planets – Sun, Venus, Mercury, North Node and Pluto – in Mandela’s 12th House.

Upon his election as President of South Africa, in early May 1994, Neptune and Uranus were opposing his Sun and Saturn had recently made the first pass of its transit to his IC. Transiting Chiron was still in the midst of its series of conjunctions with his MC, a transit that symbolised the healing that needed to be done in South Africa after many years of apartheid and was also an apt symbol for the final acceptance of Mandela, the former maverick, into his full power and influence.

There’s no doubt Mandela has had a long and singularly remarkable life, one which is reflected powerfully in his birth chart and transits. Once dubbed a dangerous and violent threat, he rose to become one of modern history’s most transformative leaders, described by Desmond Tutu as “the beloved father of our nation” His current illness, as transiting Neptune approaches his IC, is a reminder that while this popular and influential figure cannot live forever, his legend will never be forgotten.

30% off Saturn in Scorpio: Your Guide Through The Dark until the end of June.
Click here for full details
www.mandilockley.com
at June 16, 2013