On 5th August (in US time zones) and 6th August (European time zones), we experience the third and final Eclipse of the season, a Lunar Eclipse in Aquarius. During a Lunar Eclipse, the Moon has completed the exact half way point of her monthly circuit around the Zodiac and is in an opposition with the Sun, the position of the Full Moon. The Full Moon is usually the brightest and fullest of times, when the Goddess is in her incarnation of the fertile mother. However, this month, as the Sun and Moon face each other off, the Moon passes behind the Earth, where she can’t receive the energizing rays of the Sun. At her ripest time she is Eclipsed.

The Lunar Eclipse, therefore, is a time of deadlines and endings, a time to let go of stubborn ideas and worn out attachments, a time to play out the themes of the Leo-Aquarius opposition.
The Leo-Aquarius axis symbolizes the need to balance the individual need for personal gain and acclaim with the collective responsibility to abide by rules set to benefit all of society (and if you think that following rules is not very Aquarian, pause to remember that Aquarius’ ancient ruler is none other than stern father Saturn).

Aquarius will never deny Leo’s right to be king, but will absolutely insist that the king serves his people with integrity and honesty. Teamwork and delegation of authority is everything to Aquarius and selfish greed is just not acceptable. Aquarius teaches that ultimately it is through serving the group, the community, the team, our friends, that we gain the honour and significance that is so crucial to Leo.

Conversely, Leo teaches Aquarius that sometimes you have to take the lead if the cause is important enough. Somebody has to stand up for the masses, rebel against the status quo and shake the system up, if there is to be any chance of a lasting change for the better and what better than Aquarian energy to do this!

That this Eclipse occurs the day after Barack Obama’s birthday and falls on his Sun in Leo can be no coincidence! In fact, the Leo-Aquarius axis is very prominent indeed in his horoscope and his mission is surely to be an influential catalyst for these themes.

Obama has Aquarius rising and Jupiter in Aquarius, with Sun, Mercury and Uranus in Leo in the public-seeking Western hemisphere of his chart. The karmic, lesson-giving nodal axis also falls across Leo-Aquarius in Obama’s chart. (4th August 1961, 7.24pm, Honalulu, Hawaii - the chart is posted below).

“Yes We Can” – is such a wonderfully positive Leo-Aquarius refrain, so let’s hope that that the fervor of the election spirit is revived and put to beneficial use, following this Eclipse time.

On a personal level, look for help from the significant groups to which you belong (your community, your team, your friendship circle etc) during this Lunar Eclipse for clues about what might need to be released in your life right now, then seize your power, remembering to act in a way that will benefit the group, whilst still honouring your own unique, highly individual needs.

Mercury, who moved into discriminating, rational Virgo on 2nd August, will be there to assist in this process and a helpful aspects to Pluto on the 3rd will make it easier to think deeply, weigh up the pros and cons and make level headed decisions. Additionally, on the 10th, a hard working square between Mars and Saturn will give you the energy and resolve to follow through.

This Eclipse, at 13 degrees and 43 minute of Aquarius will affect Aquarians born between 31st January and 4th of February and Leos born between 3rd and 7th August, as well as as well as people who have other planets or angles between 11 and 16 degrees of Leo or Aquarius. Additionally, any planet or point at 11 through 16 degrees of Leo or Aquarius will be activated by the August 6th Lunar Eclipse.

If you do not know your chart and want to see if the Eclipse is in close contact with your chart, you can quickly and easily download a free birth chart from http://www.alabe.com/ which also includes a basic interpretation.

If you want to go deeper, please also see my article Working with Eclipses, for information on how to work with Eclipses which closely aspect your natal horoscope. 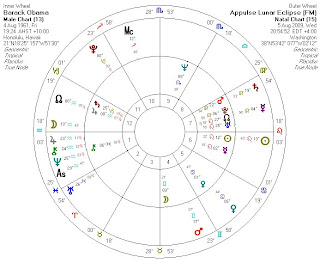