Synastry ~ Making Friends with the Elements 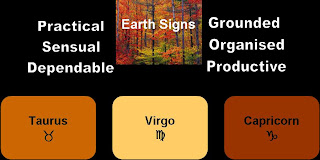 [Note: this article has also appeared on www.sasstrology.com a popular website that looks at the astrology of love, sex and relationships]

Have you ever wondered why you attract the friends and lovers that you do? Is it your similarities that bring you together, or your differences, or a bit of both?
In astrology, the study of relationship compatibility is called synastry, or chart comparison. Synastry can be complex, but like most things in astrology, keeping it simple can be very enlightening.
So, for the first in an occasional series of articles on synastry, I’m going to look at the elements. 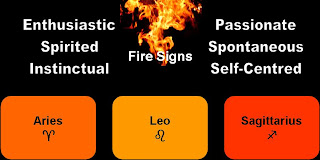 The elements are the basic building blocks of astrology (see the graphics for the signs and key words for each element). Popular theory says that you will be compatible with signs in your own element, so Fire gets on with Fire, Water with Water etc. Additionally, Fire and Air signs are said to get along, as are Earth and Water signs.
However, I have also found that we are very often attracted to the element we lack in our own chart. It’s as if we look towards others to compensate for what we don't have. Here are a couple of celebrity examples:
Brad Pitt and Angelina Jolie

Angelina Jolie has a chart strong in Fire and Air, with a good splash of Water as well. She is totally lacking in the Earth element.

People with a lack of Earth in their charts often feel rootless and ungrounded. They may feel as if they don't fit into the 'real' world and often have difficulty following the routines and limitations that are demanded by everyday material life. Jolie's unbounded wild behaviour, risk taking and fantasies are well documented. 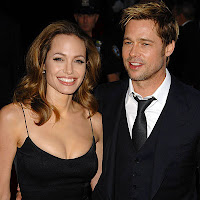 Brad Pitt on the other hand has a stellium of personal planets (Moon, Mercury, Venus and Mars) in practical, down to earth Capricorn. While we can't speculate on their private life, it's easy to see how earthy Pitt might provide Jolie with a sense of the stability, rootedness, routine and structure she appeared to lack in her younger, crazier days. Certainly, she has become the model earth mother since meeting Pitt, as evidenced by her brood of six kids. It's interesting that she has so many kids, as people often compensate for their lack of element by totally overdoing it.

Does spontaneous Jolie find practical Pitt boring at times? Who knows, but I'm sure that his adventurous Sagittarius Sun and Ascendant must provide a bit of excitement to keep the fire alive in their relationship.
Beyonce and Jay-Z 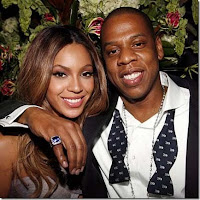 Singer Beyonce has very little Fire in her chart, which is compensated for by rapper Jay Z's Sun, Mercury and Venus in fiery Sagittarius.
A lack of Fire can manifest in a lack of self confidence and a lack of enthusiasm, faith and optimism in what life has to offer.
Jay-Z's fiery get up and go, idealism and energy, is probably an effective foil for Beyonce's lack of fire and conversely, Jay-Z lacks Earth in his chart, so Beyonce's practical, down to earth Sun in Virgo no doubt helps him to keep his feet on the ground.

Here’s a very simple exercise to see if this works for you:
First of all work out what element/s you have a preponderance of and which you have a lack of. If you don’t already know this, here’s a link to an article from astrology-numerology.com which tells you how to work it out and also includes useful interpretations http://www.astrology-numerology.com/elements.html (Note: If you know your birth time, I would also include three points for the Ascendant and one point for the Midheaven. Oh, and if you don’t know your chart you can download it at www.alabe.com).
When I did this exercise for myself I scored high for Air (hence the Astroair moniker); average for Earth and relatively low for Fire and Water.


Next look at the charts for your close friends and your partner (if you have their permission to do so). 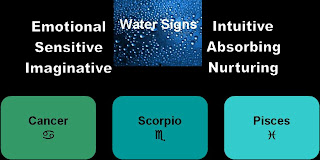 Here’s a few of mine:
One of my close friends has a very strong Water chart, with Sun, Moon and Ascendant all in water signs. Definitely a good foil for my lack of water. I love how I can tell her all my woes and she will just listen and be with me and empathise, without giving advice or instruction or trying to ‘fix’ or change things.
A lack of Water can mean that it's difficult to empathise with others and hard to pick up subtleties of feelings in relationships. The emotions may not be easily accessible to those lacking in Water, although that doesn't mean that they don't have strong emotions, just that they may have difficulty expressing them. If you are lacking in water however, try to not ‘dump’ all your emotional stuff on your watery friends. Be aware that they are very sensitive, like sponges, and they will carry your karma away with them, without either of you even realising it.
Another close friend of mine has a totally fiery chart with Sun, Moon and Ascendant all in Fire signs. I really admire her nerve, spirit and creativity. An afternoon with her really lifts my spirits and makes me feel as if anything is possible. Longer than an afternoon though, makes me feel positively 'burnt out'.
It works both ways of course. Your friends might be attracted to you because you have an element they lack. For example, a good friend of mine with lots of Earth and a watery Moon in Cancer (she bakes the best muffins this side of, well, the Moon) totally lacks Air in her chart. 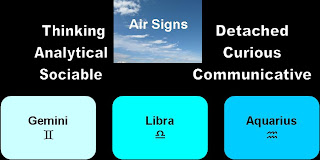 With a lack of Air, it can be difficult to take a step back from one's life in order to see things in perspective. It can be difficult for a person with a lack of Air to detach themselves from feelings and situations and it can be hard for them to adjust to new ideas and differing points of view. Perhaps my airy nature is a good foil for my friend's lack of Air, in the same way that her watery planets nourish my lack of water.
If I do the same exercise for all my close friends and for my hubby, they are all without exception strong in either Fire or Water, or both in some cases.
What about you? Do your close friends and your partner reflect the elements you are lacking? Or are you more attracted to people with a similar element balance as yourself?

Let me know in the comments box below...
For more on the elements see, Astrology, Psychology and The Four Elements by Stephen Arroyo
Celebrity chart info from: http://www.astro.com/astro-databank