Johnny Depp ~ All Hands on Deck

Are the characters that actors play reflected in their charts? Too right!
In the first of an occasional just-for-fun series, we’re taking a look at the chart of Johnny Depp to see where we might find Jack Sparrow, Edward Scissorhands and company.
The first thing you notice about Depp’s chart is rebellious, unconventional Uranus in the 1st house conjunct Mars. Depp has the performer’s Ascendant of Leo, so he goes out into the world on display, wanting to be seen, but with Uranus in the first, he doesn’t want to be seen as ordinary and traditional. Mars conjunct Uranus suggests that he puts a lot of his energy into nurturing this self-image. Mars in Virgo though is the perfectionist, suggesting he wants to do things right and be good at what he does. On the other hand, Mars in Virgo in the first can be a bit shy and reticent about pushing one’s self forward. However, such is the influence of Uranus on that Mars that he just can’t help himself, that planetary combination is just chomping at the bit to express itself one way or another.
So how does it express itself in the characters he plays? Think of three of his most famous roles - Jack Sparrow, Edward Scissorhands and Willy Wonka - all unconventional, rebellious, outsiders. Played to perfection! Depp himself is in disguise when he’s in these characters, barely recognisable as himself. Note that Mars and Uranus are widely conjunct Pluto, the master of disguise and transformation. Note too, that all of his most famous roles are darkly comic, sometimes bordering on the darkly tragic or the just plain dark. That shy Mars in Virgo sandwiched between Uranus and Pluto sure does finds its way to let his Leo Ascendant shine!
And here’s a thing. Look at the pics below of Depp in his most well known roles. In every case, he’s playing an unconventional, dark character, an antihero (Mars-Uranus-Pluto), but look at his hands. They’re always occupied with some prop. This is not just a reflection of his Sun in Gemini (Gemini rules the hands and lends lots of fidgety nervous energy to the Sun), but it comes back to that Mars-Uranus conjunction in the first. His characters tend to carry sharp, pointed objects – blades, swords, scissors, sticks etc. Mars of course rules sharp, pointed objects, particularly those that cut and Mars in Virgo further suggests dexterous digits. In the first house, this facet of his chart has become a big part of his on-screen identity, in a weirdly Uranian way. 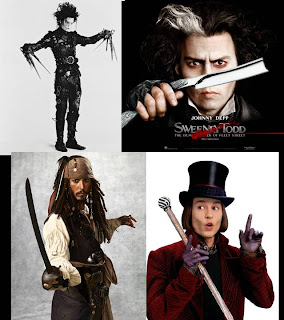 Isn’t this fun?
What about the rest of his chart? After all this talk of his characters as unconventional outsiders, look at that Moon in Capricorn in the 6th. This is a man who takes his work very seriously and needs to follow the rules, if only his own rules. Note also the Jupiter in Aries in the 9th, a placement that suggests the urge to jump right in and take big risks on things he believes in whenever the opportunity arises. However, a very tight square to Jupiter from the 6th house Capricorn Moon suggests that Depp has a good business sense and will only take a calculated, well thought out risk. For example, he was told that Jack Sparrow would be career suicide, but instead, Jack’s become one of the most successful movie character franchises. Far from stereotyping him, Sparrow has actually expanded Depp’s appeal into the mainstream, while still allowing him to play the weirdest and wackiest oddballs in Hollywood. Besides, you try stereotyping someone with Mars conjunct Uranus in the 1st house!!!
What about his reputation? Look at the Taurus MC, with its ruler Venus highly dignified in Taurus and conjunct Mercury in the 10th. This strongly suggests someone who comes across to the world as charming and attractive, someone idealistic on the one hand / idealised on the other.
Finally, it doesn’t seem to matter how often Depp ‘uglifies’ himself with costumes and make up, he can’t escape his heartthrob status. After all Neptune, (glamour, illusion, idealism, romanticism) makes a nice creative Quintile aspect to the Mars-Uranus conjunction suggesting that his weird, oddball characters only add to his personal allure. It’s no mistake that Depp still regular shows up in the list of top ten Hollywood heartthrobs!
With love,
Mandi
http://www.mandilockley.com/
at February 08, 2011