Nodes into Sagittarius-Gemini ~ A New Perspective 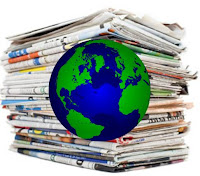 After approximately 18 months travelling through the Capricorn-Cancer axis, the Moon’s Nodes move into the Sagittarius-Gemini axis on 14 February 2011*. Nodal sign changes symbolize a shift in the cosmic karmic energies, a signal for a change in the collective consciousness.
While the North Node was in Capricorn and the South in Cancer, the collective has been concerned with security - applying the usual, age old methods to secure and stabilise things materially, economically and politically. Security has been a big concern – collectively and individually – as many families have struggled to hold onto their homes and jobs. We’ve been bogged down by responsibilities and struggling to maintain the work-life balance, which has taken its toll emotionally, particularly for those who have dependents reliant upon them to ‘bring home the bacon’.
When the North Node moves into Sagittarius and the South Node into Gemini, there is a shift in energy and we are invited to view things from a new perspective.
While the Nodes in our own chart say something about our personal life purpose, the transiting nodes speak about a temporal shift in our collective purpose. The transiting South Node represents a dispersing, separating energy, something from the past we need to move away from, but something that it’s all too easy to fall back on. The North Node on the other hand represents a new influx of energy that we need to move towards.
In Sagittarius, the North Node asks us to take a step back and view our world from a wider, broader perspective. This placement is about hope and belief and learning to put faith and trust in something bigger than ourselves. It requires us to step out of our regular day to day routines and concerns so that we can see the bigger picture. This North Node shows us where we have been blocked from expanding and stretching ourselves mentally, where we have become bogged down by the constant, relentless influx of information, facts, news, messages, communications. Now is the time to sort out all the meaningless crap from the real important stuff, to focus on what things ‘mean’, rather than what things simply ‘are’.
We are asked to focus less on immediate, local concerns and look at things more from a bigger, global perspective. In our ever shrinking world, with instant access to news and information we are becoming a true global village and we need to understand that instability and inequality in far flung places really does affect us, because we are all connected, now more than ever.
We are invited to recognise that the conditions of workers in Chinese factories, the demands of pro-democracy protesters on the streets of Cairo, the poverty of subsistence farmers in Kenya and the state of the stock market in Tokyo and so on, really does affect us. This stuff really does inform the decisions of our political and business leaders. It informs the price of a bean, the cost of a tank full of gas, the value of our currency and the policies and agreements that connect our part of the world with the rest of the world. By learning to understand this, at a deep level, we can learn how to ask the right questions and move some way towards insisting our world becomes a better and fairer one for everyone in it.
Suggestions for North Node Sagittarius / South Node Gemini
~ Take a leap of faith.
~ Indulge yourself in deep study.
~ Pay less attention to gossip, rumour, and hearsay.
~ Learn to really listen to what you say and to what others say and seek the deeper meaning in conversation and communication.
~ Learn to understand how information is presented, how what is not said can be just as important as what is said. Understand how facts can be manipulated to suit a particular agenda.
~ Question the truth of what you hear.
~ Seek out opinions that are different from your own and look for the common threads in those differences.
~ Get into the habit of ignoring/deleting annoying and irrelevant emails/newsletters/junk mail etc.
~ Set some long term goals for the future.
~ Travel to some far flung places.
~ Learn about different faith systems and focus on the things that bring different faiths together rather than the things which drive them apart.
~ Spend time with people from different cultures and countries.
~ Take an active interest in the global news, rather than just your local/national news. See what the other side are saying, notice the differences in bias and seek out the common meanings.
~ Learn to embrace the abstract.
~ Listen to your intuition.
The Nodes Transiting Your Chart
If you have planets or angles in Sagittarius or Gemini, the Nodes will make direct connections to your chart sometime over the next eighteen months by conjunction or opposition. If you have planets or angles in Virgo or Pisces, the Nodes will square those planets/points. Paying attention to these transits can highlight where you need to grow on your life journey.

Remember, the Nodes are a travelling opposition and like all oppositions, they often manifest in relationships. Nodal transits therefore often bring meetings and connections with other people that can help you move on from the past (as represented by the North Node) and into your future.


However, with the North Node in expansive Sagittarius, this transit will inform not just your relationships with people, but your relationship with the world at large. While the North Node in Capricorn was about your place in the world, the North Node in Sagittarius is about what you do with yourself once you have found your place, a quest that requires faith and self belief.
Data:
The North Node moves into Sagittarius / South Node into Gemini on February 14th 2011.
The Nodes remain in Sagittarius/Gemini until September 14th 2012, after which they move into Scorpio/Taurus.
(dates based on GMT time).
Essential reading on the Nodes:
The Astrologer’s Node Book by Donna Van Toen
The Astrology of Self-Discovery by Tracy Marks
Astrology for the Soul by Jan Spiller
With love,
Mandi
http://www.mandilockley.com/
*The Mean Nodes moved signs on February 13, but if you use the True Nodes they change on March 4 (March 3 for American time zones).