Everything you need to know about June 2012 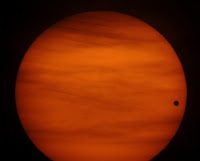 June is upon us, bringing three significant and exciting astro-events.

Firstly, there’s a Partial Lunar Eclipse on June 4. It falls at 14 degrees-14 minutes of Sagittarius and Gemini. If you have planets or points at 13-15 degrees of the mutable signs - Gemini, Virgo, Sagittarius or Pisces - this Eclipse will touch your chart.

You can get your chart for free at http://www.astro.com/ or http://www.alabe.com/ and also see my article Working with Eclipses for tips on how to interpret Eclipses.

June 5/6 brings a rare transit, when Venus, planet of love, money and values, passes directly between the Sun and the Earth and is visible as a small dark disk passing across the Sun’s face.

Significantly, Venus falls in the same degree as the Eclipse the day before, 15 degrees-44 minutes of Gemini, so if you have 15 degrees of the mutable signs highlighted in your chart, this is an event well worth following.

But what is a Transit of Venus exactly? What does it mean? The links below should help...

As usual, NASA is the first port of call for all things astronomical. Their special site includes explanation, history and a live webcast of the event on June 5/6: http://venustransit.nasa.gov/transitofvenus/

Everything you need to know, including advice on viewing it safely (you should never look directly at the Sun) at: http://www.transitofvenus.org/

Finally, this excellent post discusses events that coincided with previous Venus Transits. What will this transit bring as Queen Elizabeth II celebrates her Diamond Jubilee and mega-movie Prometheus is released? http://copycateffect.blogspot.mx/2012/05/venus-transits-sol.html

June 24 sees the first exact square of Uranus in Aries to Pluto in Capricorn. On the big picture level, this aspect has been playing out a while, but now it’s exact it will reach its highest intensity, with six further exact squares coming September 2012 through March 2015.

Here’s what it signifies, in a nutshell:

Since 2007 an exciting, powerful and incredibly disruptive planetary alignment has been forming. Rebellious Uranus has been squaring up to Pluto in Capricorn. Uranus’ energies have been compared to those of the mythical Prometheus, who stole the fire from the gods and gave it to man. Combined with Pluto, Uranus ignites revolutionary impulses and upsets the status quo. This planetary combination has been associated with mass rebellion against the establishment, revolutions, civil rights movements and radical social and political change.

The above is from Uranus-Pluto and Our Changing World. The article includes a fascinating look back at historical Uranus-Pluto alignments. Read more here....

How are Astroair’s 2012 predictions playing out? Find out here...

Over the next three years the Uranus-Pluto squares occur between 6 and 15 degrees of Aries and Capricorn, so if these degrees are highlighted in your chart (and also 6-15 degrees of Cancer and Libra), then these squares will form a significant transit to your chart. A time of change is on the horizon for you, that's for sure.

Moon Phases and Void of Course Moon Times for June are up on my website. See http://www.mandilockley.com/ for details.