At the bottom of the Gulf of Mexico, on the sea bed, over half a mile down, there lies an underwater lake, with a lapping tide, a curving shoreline and a surface easily discernible from the surrounding sea water.

How can that be? It's underwater?

It turns out that the water in the 'lake' is a thick briny soup, much heavier than regular sea water and that its 'beach' is made up of a vast colony of mussels. This habitat has evolved a completely new ecosystem, full of previously undiscovered species of flora and fauna and so deep under the water that it functions without the life giving energies of the Sun. Instead it is fuelled by bacteria and methane.
So far we have explored just 1% of the ocean floor, so who knows what else is out there to be discovered. It feels like a metaphor for the unknowable parts of our subconscious. And mysterious impossible lakes beneath the sea? It feels like we are swimming in Neptune's kingdom.
When we're experiencing a Neptune transit, or dealing with challenging natal Neptune aspects activated by a transit from another planet, we can feel the drag and the weight of our own metaphorical underwater lake, the depths of our subconscious. It pulls us down towards own heavy, dark, alien, undiscovered places. Environments that we'd probably rather not explore.
Do we dive right into the murky depths to find what's underneath?  Not that easy and maybe not even advisable for some of us, but we might decide after some hesitation that resistance is futile and let ourselves be dragged wherever our psyches lead us.  Or do we float on the surface of our lake, rest there a while and see where the tide takes us, trying not to go under. Maybe we hover around the shoreline, looking in but not touching? Perhaps we don't go there at all and stay near the surface of our regular ocean, our conscious emotions, where we can still see the Sun and breathe the air. Whatever choice we make, and maybe its not a conscious choice, we are driven by our instincts. Logic and reason can't help us.
That thick, heavy, swampy water in the underwater lake can be read as a metaphor for the deep ancient emotions that we have denied or forgotten, but ones we have carried with us nevertheless. If we stir that water, those emotions will become disturbed, eventually bubbling up to the surface, ultimately releasing and dissolving the toxins, but making us deal with the emotional pollution that is the by-product of the process.
Neptune demands that we put our faith in the unknown, but it is as likely to punish us for doing so (disappointment, disillusionment, delusion) as it is to reward us (spiritual awakening, cleansing of the spirit, belief, creative inspiration, the awakening of compassion).
But we still must take our chances, because we soon learn that to resist is to invite unnecessary suffering. Our Neptune transit (or transit to Neptune) reminds us that, like the underwater lake under the Gulf of Mexico, life is a mystery and that often we are even a mystery to ourselves. 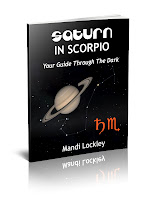 And now for some Saturn news
It's a year to the day since Saturn moved into Scorpio and I would like extend to a BIG THANK YOU to everyone who has bought my e-book Saturn in Scorpio: Your Guide Through The Dark and for the positive feedback. I hope it's been an interesting and helpful read.
Saturn's still got more than a year and a half to go in Scorpio, so if you want to find out more about the book, follow this link: http://mandilockley.blogspot.co.uk/p/saturn-in-scorpio-your-guide-through.html
With love and thanks,
Mandi
at October 05, 2013 2 comments: