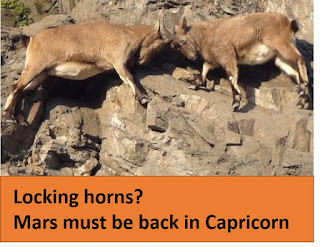 It was last in Capricorn March to mid May - watch out for recurring themes in how you act and react. In particular, how were you feeling in the first half of May? Does that relate to now? Are you covering old ground?

Mars goes Direct on August 28 and then re-enters Aquarius September 11. Think back to Mid May when Mars first covered those early Aquarius degrees ~ it was probably a pretty intense time if you've planets and angles in the early degrees of the fixed signs, especially as Uranus in Taurus is Square to Mars in early Aquarius.

For me, this has been my Mars Return (Mars in early Aquarius Conjunct Moon) ~ lots of emotions from the past coming up for me, begging for release. I found the courage to share some of my story with close trusted friends and it was cathartic.

This current period might also remind us of when Mars was Conjunct Saturn, end March / early April. For insights on this, I recommend this short video Tough Breaks, Rewind: Mars and Saturn in Capricorn Again from Marcos Patchett for the Academy of Astrology:


While you're here, why not also check out my short, fun video explaining what burgers have to do with Uranus in Taurus!


Thank you for reading and watching
You can also read my articles on Astro.com: