The Story of an Art Heist ~ The People vs. Big Business 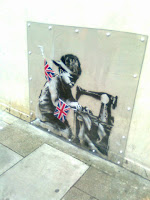 When a new work by renowned street artist Banksy appeared on the side of a Poundland store in London's Wood Green, locals were thrilled and the Council was quick to express its support and enthusiasm.

The piece appeared overnight on 13/14 May 2012 and is thought to be a comment on child slave labour and on the Queen's Diamond Jubilee.

I live about a mile from Wood Green High Road. It's not an attractive or exciting shopping hub, but it serves its community well. It's been hit by the economic recession and was badly looted and vandalised during the riots of 2011. The appearance of a Banksy was a real boost, something to feel proud about.


At its surprise appearance (chart above), the Moon was in Pisces, joining Neptune and Chiron (art healing the people). The Sun joined opportunistic Jupiter in materialistic Taurus. Mercury was also in Taurus in an Earth Grand Trine with Mars in Virgo and Pluto in Capricorn. This Trine along with the Taurus concentration describes what happened next very well.

Overnight on 16th February 2013 the artwork was removed from the wall, leaving an ugly scar. Poundland denied all knowledge and lawyers representing the owners of the building refused to comment. The artwork then appeared up for auction in Miami, expected to sell for upwards of £450k.

Big business (Capricorn) profiting (Taurus) at the expense of the 'little people' (Virgo).

At the approximate time of the 'theft', the Moon was in Taurus opposing Saturn in nefarious Scorpio (the money theme again) connecting with Mars in the chart for the artwork's appearance. Mercury and Mars were by now joining Neptune and Chiron in Pisces. Venus (art appreciation) is in cause-loving, 'for the people' Aquarius.

The story has spread far and wide. Locals and the Council are campaigning for the return of the street art to their community. Passionate supporters have bombarded the auction house with angry calls and posted outraged comments on its Facebook page. Nobody has claimed responsibility for taking it, so it is unclear (Pisces) whether it was stolen or removed legitimately. Even Scotland Yard and the FBI became involved.

The latest exciting development this morning (with Moon in attention grabbing Leo) is that the auction house, Fine Art Auctions Miami, confirmed that at the very last mimute they withdrew the piece, along with another Banksy, from sale. A turnaround reflected by stationary Mercury, still in Pisces, and ready for its retrograde later today.

It's also interesting to note that the strong Taurus (money) theme from the previous two charts is missing from the chart of the sale withdrawal.

What next? Wood Green wants its Banksy back. Will it be returned to its community or quietly sold to a private buyer? Watch out for news around March 3, when Mercury moves back to 15 Pisces in its retrograde, the degree of the theft. Also, around April 3, when Mercury hits that point again in its forward motion.

I would like to see it back in the community, so all can share and enjoy it. 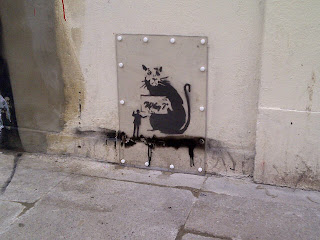 Meanwhile, a collage of new graffiti has appeared on the side of Poundland, proving that when you create a space it never remains empty for long. It's thought that the small rat asking Why? is another Banksy original.

All photos by Mandi Lockley

What Goes Around Comes Around

Because we're ruled by time, it’s easy to believe that the human experience is linear, that we move ever forward in one direction. When you study astrology – as indeed when you delve into the bigger picture of history - it becomes very apparent that on our constantly revolving earth, everything is in fact cyclical. This, to me, is in its turn a reflection of the observable cycles of nature and the predictable movements and alignments of the planets.

I was doing some research for my new book (non-astrology-related) and it took me in a round about way to the Wikipedia entry on Franklin D Roosevelt’s Inaugural Speech of 1933.*


On the day, Uranus in Aries was exactly square Pluto in Cancer at 21 degrees.  Today, Uranus has returned to Aries and once again is in the midst of a series of game-changing squares with Pluto (now in Capricorn). The same astrological cycle is repeating itself.
These astrological parallels between now and the 30’s (the Great Depression era) are also clearly reflected in the startling similarities between the state of the world as it was then and the world as it is now.


Here’s an excerpt from the Wikipedia entry quoting Roosevelt’s speech. Perhaps his sentiments need to be revived his modern day counterparts:
Addressing himself to the causes of the economic crisis and its moral dimensions, Roosevelt placed blame squarely on the greed and shortsightedness of bankers and businessmen…


“...rulers of the exchange of mankind's goods have failed through their own stubbornness and their own incompetence, have admitted their failure, and have abdicated. Practices of the unscrupulous money changers stand indicted in the court of public opinion, rejected by the hearts and minds of men.
The money changers have fled from their high seats in the temple of our civilization. We may now restore that temple to the ancient truths. The measure of the restoration lies in the extent to which we apply social values more noble than mere monetary profit.


Recognition of the falsity of material wealth as the standard of success goes hand in hand with the abandonment of the false belief that public office and high political position are to be valued only by the standards of pride of place and personal profit; and there must be an end to a conduct in banking and in business which too often has given to a sacred trust the likeness of callous and selfish wrongdoing.
Restoration calls, however, not for changes in ethics alone. This Nation asks for action, and action now.”

Roosevelt then turned, in the following excerpts, to the daunting issue of unemployment, which had reached a staggering 25 percent when he assumed office:

“...the withered leaves of industrial enterprise lie on every side; farmers find no markets for their produce; the savings of many years in thousands of families are gone.


More important, a host of unemployed citizens face the grim problem of existence, and an equally great number toil with little return. Only a foolish optimist can deny the dark realities of the moment.
Our greatest primary task is to put people to work. This is no unsolvable problem if we face it wisely and courageously.


There are many ways in which it can be helped, but it can never be helped merely by talking about it. We must act and act quickly.”
Proof if ever we needed it the world turns in cycles and what goes around comes around.


Roosevelt's speech also coined the famous phrase, still so relevant today:
“The only thing we have to fear is...fear itself.”


Perhaps we should all take a moment to ponder on what that means.
With love,
Mandi
www.mandilockley.com

Don’t forget, over at www.mandilockley.com you can find this month’s Moon ingresses, Moon phases and Moon void of course times.