Jupiter in Leo - The Iraq Connection

Jupiter in Leo is an important trigger, a crucial point in the Jupiter cycle for the modern history of Iraq and a transit to watch closely. 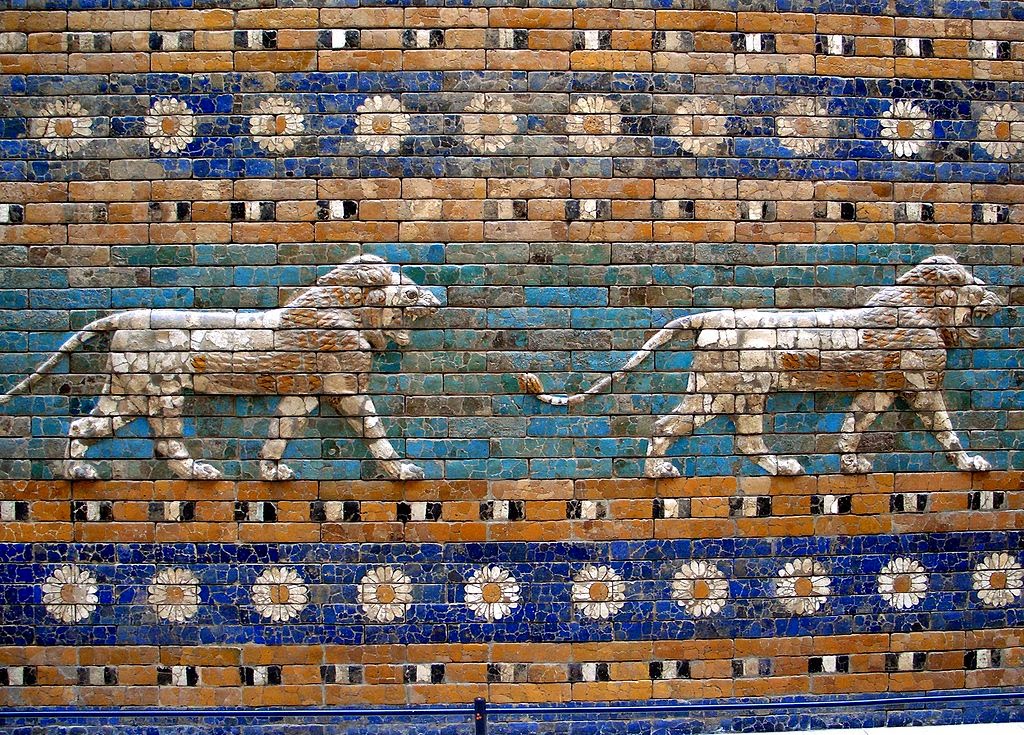 Iraq is awash with Lion symbolism. The Desert Lion (Shakir Wahiyib, the public face of Islamic State); The Lion of Babylon (Iraqi tank used during the 1991 War); the other Lion of Babylon (representing the King of Babylon and depicted at the Ishtar Gate to the ancient city, now part of Iraq) and of course, the live lions Saddam Hussein kept at his palace.

Also, it seems that Jupiter's transit of Leo is incredibly relevant to modern day Iraq. This is an expansion of my post of early July written just as Jupiter was moving into Leo, with further insights to offer, more dots to connect.

When in Leo, once every 12 years, Jupiter transits through Iraq's first house (representing the country as a whole and its leaders, its identity, its ego and how it wants to be perceived by the world), making conjunctions to its Mercury and Uranus conjunction as it goes, before moving into the 2nd house (its assets and values), eventually meeting Pluto at zero of Virgo. Pluto in this case perhaps signifying upheaval, destruction, oil as an asset and regeneration after war.

Here's the potted history, all of it directly connected to what's happening today:

This was the period of the 1st Iraq War.

It was waged by coalition forces from 34 UN-led nations in response to Iraq's invasion and annexation of Kuwait in early August 1990. The conflict began with an aerial bombardment on 17 January 1991, followed by a ground assault on 24 February. A United Nations Security Council Resolution in April 1991 established formal cease-fire terms. The controversies over enforcing this (the disarmament crisis and alleged weapons of mass destruction) and subsequent resolutions led directly to another war 12 years later - when Jupiter next returned to Leo.

Jupiter’s next transit through Leo was August 2002 through August 2003.

During this transit, Jupiter made three hits to Iraq's natal Uranus at 10 degrees Leo in the 1st House, between Sept 02 and May 03. Additionally, Jupiter in Leo Squared Iraq's Neptune at 2 Scorpio in the 4th House in August 2002. The 4th represents the land a country occupies, its regular people (vs. its elite) and politically, the opposition to the ruling regime. Of course, these same planets would have been hit during the previous transit in the early 90's.

Here's a timeline of events for the 2nd Iraq War:
·         In August, a group of Iraqis opposed to the regime of Saddam Hussein took over the Iraqi Embassy in Berlin for five hours before releasing their hostages and surrendering.

·         In November, The United Nations Security Council unanimously approved a resolution, forcing Saddam Hussein to disarm or face "serious consequence." Iraq agreed to the terms and the UN sent in its weapons inspectors

·         In Feb 2003, an estimated eleven million people around the world took to the streets to protest against the looming war with Iraq, followed by the largest coordinated worldwide vigil in March as part of the global protests against an Iraq war (that internationalism theme again). British Cabinet Minister Robin Cook resigned from government over plans for the war with Iraq. 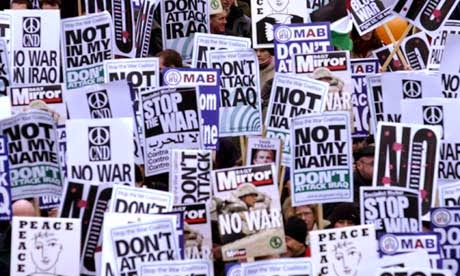 ·         In early May, President George W. Bush declared that major combat operations in Iraq had ended.

·         In July, the US military attacked a compound in Iraq, killing Saddam Hussein's sons.

·         It was in December of 2003, with Jupiter moved into Virgo and conjunct Iraq's Pluto, that Bush announced the capture of Saddam Hussein.

The toppling of Saddam Hussein’s government in 2003 marked the start of years of violent conflict with different groups competing for power. This is now coming dramatically and violently to a head, with current events directly linked to those of the early 90's and 00's.

When I wrote my first post on Iraq over a month ago, Iraq was at the top of the world news, with concerns over the ascent of Sunni rebels led by the Islamic State of Iraq and the Levant (ISIS) now known as Islamic State, with reports that thousands had fled the ensuing atrocities, with Iran and the US offering their assistance, but with the UK still on the fence.

Now, of course, the US have launched air strikes in support of the Kurdish militia and as predicted the UK government have told us that military involvement is now inevitable, but so far have limited it to humanitarian aid and what is set to be a prolonged Royal Air Force reconnaissance mission. The Prime Minister has ruled out 'boots on the ground' but has not ruled out other intervention including arming the Kurds. The focus, he says, is on protecting the UK from a terrorist threat. Perhaps this reticence for sending in the army to fight is a lesson learned from the political suicide committed by former Prime Minister Tony Blair, when he declared war on Iraq in 2003 without the support of the UN or the majority of UK citizens.

Whatever occurs next, the direct connections between now and events in Iraq spanning back over the last 24 years and earlier need to be considered. Already, nobody can argue that the so called War on Terror that led to the 2003 Iraq War didn't directly radicalize certain Islamic factions.

The 1801 UK chart has Jupiter in early Leo and Saturn later in Leo, so the country has just had a Jupiter return. While a UK presence will be in Iraq in some form, the full consequences or ramifications will only be felt once transiting Jupiter hits the UK's Saturn in around a year's time. At the same time, Jupiter hits Iraq's Pluto. We can expect to see a shift in power, a moving around of assets, rebuilding, rehabilitation, restoration, perhaps a new government. But at what human cost?

The US Sibley chart has the North Node (destiny/lessons/the mission/key relationships/significant meetings) at 6 Leo in the 8th House (financial relations with foreign countries). Jupiter has now hit that point.

Jupiter will also Conjunct Barack Obama's Leo planets - it has already crossed Mercury (the time for talking is over) and is heading for his Sun in the 6th  (national services including the army and the navy) and the Uranus and North Node in the 7th (foreign affairs, relations with other countries, open enemies) and the DC in Leo. This is of course the first time Jupiter has crossed those planets and points since he has been in office, so these transits will be interesting to observe.

Note also that George Bush Snr. (President during the 1991 Iraq War) has Leo rising with a 12 house North Node and Neptune in Leo.

George W. Bush  (President during the 2003 War) shares his father's Leo Ascendant, with Mercury, Venus and Pluto in Leo. His 'partner in crime' was British PM Tony Blair. Blair has the South Node in Leo and the generational Pluto in Leo.

The connections between Bush and Blair and the US and Iraq charts are remarkable - Blair's South Node is conjunct the USA's North Node and sits on Bush's Ascendant. Bush's Mercury and Pluto in Leo are conjunct Iraq's Uranus and Blair's Moon in Aquarius opposes all of them. Tangled destinies indeed and there are plenty more connections, but time and space is short. See quad-chart below (click to enlarge). 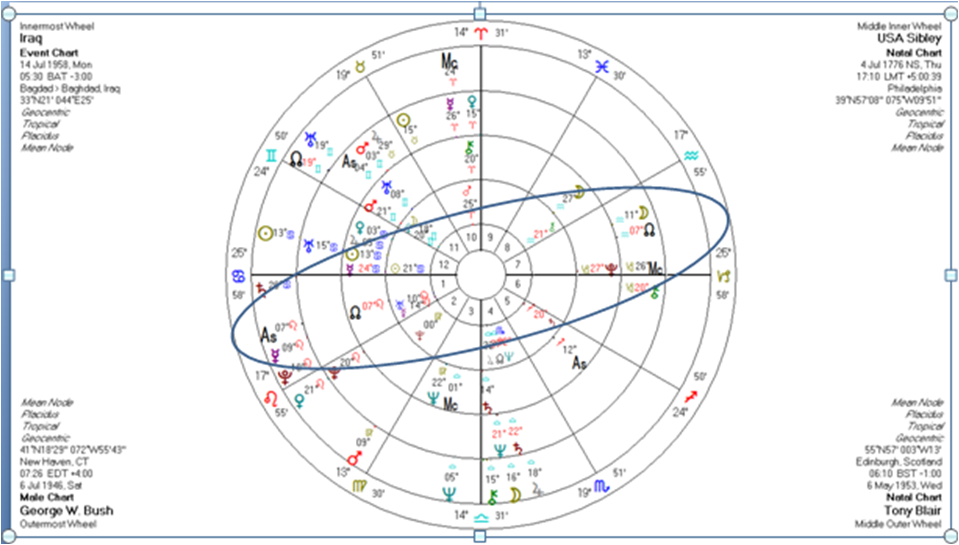 Interesting also that Obama's Leo points and planets fall in the opposite part of the chart to those of the two Bush Presidents. What does this suggest? That Obama has less control over this new war than the Bush's did in previous wars? That it's a situation he's being forced to deal with rather than a situation he's created? For sure, it's part of his destiny as President to face a foreign enemy (North Node in the 7th).

For his part, the UK's Prime Minister, David Cameron, has Moon conjunct Jupiter in early Leo (a Jupiter return for him as it is for Iraq) and Mars in Leo in the 11th House.

This all suggests that the recent history of Iraq and its future is closely tied to Western powers and their leaders and of course the facts if you care to look into them bear this out.

Certainly, there are many other astrological factors and planetary cycles to be considered, but one thing is certain:


Jupiter in Leo is an important trigger, a key point in Jupiter's cycle for the modern history of Iraq and a transit to watch closely.

The 2014 transit timings for Iraq are as follows:
Jupiter in Leo, travelling through Iraq's 1st House squared Iraq’s 4th House Neptune in late July. The 4th representing the land a country occupies, its regular people and the opposition to the ruling regime - with ISIS (now known as Islamic State) having already taken vast swathes of land, forcing many to flee or be brutally killed.

In September, Jupiter conjuncts the Uranus (rebellion, progressive tendencies, but often also the totalitarian and autocratic) in the 1st House (which describes, along with Iraq's Cancer rising and Mercury in the 1st, the country and its people as a whole, its ego and national identity).

Of course, Iraq’s weapons of mass destruction were never found and it’s now widely accepted that the dossier on Iraq’s weapons capability - used as justification for the 2003 invasion - was at best ‘sexed up’, at worst a lie. Google Iraq September Dossier to read more. It’s of note that the dossier was published just after transiting Jupiter in Leo squared Iraq’s Neptune. As Jupiter in Leo prepares to square its Neptune again, it would be wise to be wary of what we’re told about the situation in Iraq. Already, rumours are circulating around the internet, said to come from NSA whistleblower Edward Snowden, that the mysterious leader of Islamic State, Abu Bakr al-Baghdadi is a Mossad trained operative, real name Simon Elliot or Elliot Shimon.

Are we destined to keep going around and around dealing with new incarnations of the same problem until the karmic lesson, whatever that is, is learned? A cycle of rinse and repeat, with human lives the cost?
Astroair News
For regular Astroair Astrology updates (much more regular than what appears here) please like my Facebook page. Here’s the link.

Saturn is half way through its transit of Scorpio. To mark the occasion, my ebook Saturn in Scorpio: Your Guide Through the Dark is now half price on Amazon. Go straight to your local Amazon site to purchase, or click here to find out more about what’s in the book.
You can also purchase a Pdf version of the book direct from this blog via paypal.

May your cosmic journey continue to be interesting and full of joy.
With love,
Mandi
at August 18, 2014 No comments: