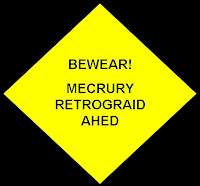 Mercury the trickster planet is Retrograde again from August 20, this time in its home sign of Virgo. Mercury Retrogrades are famously feared times when we worry that everything from communication to travel to social arrangements to important meetings will go awry.

In this age of communication, multitasking and multimedia, we may worry that the Mercury Rx phenomena is even more likely to cause us trouble. A perfectly timed headline in yesterday’s Metro newspaper reads: Half Our Life Spent on Media and goes on to say that we spend 45% of our time absorbing media, using gadgets, staring at screens and watching TV. It states that we have become experts at multitasking when it comes to media…and the old are catching up with the young at a fast pace!

Be honest, which of you have been on the internet while watching the box? I was doing it last evening. Which of you have taken a call on your mobile phone while in the middle of a conversation at a social gathering? Admit it, you have haven’t you, at least once, even if it’s to tell the person on the other end of the phone you can’t talk right now?

So, are the gremlins set and ready to make trouble with all out multimedia multitasking while Mercury’s Retrograde? We could be forgiven for thinking so… So should we avoid all mercurial stuff like the plague? No, of course not, the world won’t stop for us. I mean, shall I tell my boss that I won’t take any calls or send any emails for the next three weeks because of something imaginary* happening in the sky? Way to lose my job!

So what can we do?

This period is a great time to:

*Retrograde is a phenomenon that makes it seem as if the planets are moving backwards at certain times from our perspective here on Earth. In reality, the planets never move backwards. To learn more, click here
http://mandilockley.blogspot.com/2009/11/retrograde-planets-in-astrology.html
at August 20, 2010