The Riots and Why I Still Love London

Police helicopters? The wail of Sirens? Just another Saturday night in North London I thought, as I rolled over in bed to enjoy a peaceful night’s sleep. On Sunday morning I woke to the shocking news that just a mile away, in Tottenham High Road, a protest against the police shooting of Mark Duggan had spiraled into violence, arson and looting. 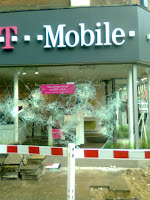 With a sense of shock, I watched the footage on TV. Around lunchtime, I headed up to the nearby Wood Green shopping centre, to pick up a paper and browse the clothing stores, unaware that while police were trying to contain the riots a mile away, local thugs had looted and vandalized the area. Some of the photos of what I saw illustrate this post. My overwhelming feeling was deep upset at the mindless, pointless destruction of my neighborhood.

As you have most likely heard, the violence quickly spread across the capital, peaking on Monday in the worst night of disorder in London in living memory. Meanwhile, there was rioting and looting in other English towns and cities, carrying on through Tuesday evening.

‘Why’ is the question on everyone’s lips. Based on UK riots in the eighties, the recipe seems to be: a spell of hot sticky weather + plus real or perceived injustice at the hands of the police (usually a death) + a background of recession/joblessness/government cuts + a Tory government. While there may be reasons, however, there can be no excuses for the actions of the kids who went out onto the streets causing terror within communities.

Because I’m an astrologer, my natural reaction is to check the skies for planetary alignments that reflect events playing out in the world.

The astrological backdrop is the square alignment of Uranus in Aries and Pluto in Capricorn.

The themes of this alignment include rebellious impulses; reckless, hot-headed behavior; sudden and shocking events; anti-establishment feelings; the demand for freedom and respect; issues of control and responsibility; spontaneous uprisings; collective and individual crisis on any level. A serious questioning of power structures and authority is indicated. The call is for deep and radical changes in the structure of society and the way it is governed. By force, if necessary. In short, we are looking at a potentially protracted period of discontent, followed by/coinciding with, slow and profound social and political change.

Past alignments of Uranus and Pluto coincided with the French Revolution of the 18th Century and the cultural revolution of the 1960’s which saw mass anti war protests; great strides in the women’s and black civil rights movements and increased social and sexual freedoms. It’s not all bad, Uranus-Pluto alignments are also associated with exciting times of cultural and technological innovation; social empowerment; positivity and freedom and new, progressive leaders rising from the grass roots and/or the intelligentsia. Under this alignment, we are already seeing pro-democracy uprisings in Egypt, Tunisia, Libya, Syria and many other places, a series of events widely dubbed the Arab Spring.

Uranus and Pluto don’t form an exact square until summer 2012, with the first of seven exact alignments lasting until 2015. However, as they get ever closer, it’s plain to see how their themes are playing out more and more obviously in the collective. Indeed, for the purpose of mundane (collective) astrology, this alignment has been one to watch since 2007 and will continue to be in evidence through to 2020 (allowing the standard 10 degree orb). From this perspective, Saturn in Libra is still connecting to Uranus in Pluto, forming a planetary alignment widely dubbed as the Cardinal Climax. (I wrote extensively on this alignment last year, click on the link to read more.)

With such dramatic events as we have been witnessing in the UK, we need to look for a planetary trigger? What is connecting to Uranus-Pluto that might symbolize what’s been happening? Above is the chart set for the time widely quoted as the start of the violence on Saturday evening.

Mars, newly in Cancer had moved into alignment with Saturn, Uranus and Pluto forming a Cardinal Grand Cross. Just the shape of the cross in the chart suggests a back and forth ping-pong of intense energy. In cardinal signs, this energy tends to be fast to respond, quick to react and create friction.

Lately though, a Cardinal Grand Cross happens every time a fast moving planet hits the early degrees of Cancer. The Sun has recently been there, so has Mercury and Venus. The Moon hits those degrees once a month. 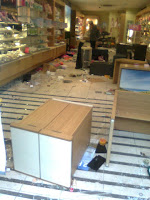 So why would Mars trigger this violence? Well, Mars is the planet of war and aggression, of the urge to action, of angry young men. More significantly, in Cancer, Mars is said be in its ‘Fall’, in the sign it finds most difficult to inhabit, making it more difficult for individuals and the collective to assert themselves in a healthy and positive way. Mars lining up with Saturn, Uranus and Pluto is not a recipe for peace and calm, but for blow-ups, misdirected anger and aggression. In collective astrology, Cancer is associated with our domestic situation, our home turf. It is perhaps ironic that after years of collective paranoia about foreign terrorists (symbolized by Pluto’s tenancy in Sagittarius until 2008) the destruction has come from our home grown young people, crapping on their own doorstep, if you’ll excuse my vernacular.

Astrologer Theodore White told me that Mars is currently Out of Bounds. I won’t go into a technical explanation of Out of Bounds (you can Google it), but symbolically, it means that Mars is wild, out of control, it has free reign to do what ever it wants to do, outside the normal bounds of behavior. Folks I’m not making this up!

Notice also the South Node. It’s in House 4 at the bottom part of the chart. House 4 symbolizes our home turf, our roots and the past. Similarly, the South Node represents past patterns that we fall back into. Astrologer Martin Davis adroitly observed that this placement of South Node, symbolizes the revisiting of past hurts, referring to the 1985 Tottenham riots, also triggered by tension between the local community and the police. The fact that at that time Uranus and Pluto were in a tense semi-square alignment, aptly demonstrates how the cycle of these collective events synchronizes with the cyclical nature of the planetary alignments.

I could go into more detail and look at more of the astrology, but I think that’s enough.

The title of this post is Why I still Love London. Here are my reasons.

London is one of the safest capital cities in the world. I have never (except for a few nights this week) felt afraid to go out after dark. We are a resilient people. As the troubles spread, so did the community spirit.

While social networking was blamed for making coordination amongst the rioters easy, soon it was being used to bring people together. Instead of coming out onto the streets with weapons and face masks, people came out in force with bin liners and brooms to collectively clean up their streets. A fitting image for a Retrograde Mercury just moving out of helpful, hygienic Virgo back into brave, proud Leo. Let’s clean up and re-claim our streets was the new battle cry!

Instead of thinking that it’s someone else’s problem or responsibility, people put up strangers in their own homes after they had lost everything to arson and looting. Bus drivers carried on working, despite the dangers (and despite Mercury retrograde!) to make sure that Londoners could get to work. There has been a massive wave of compassion for the injured Malaysian student Mohd Asyraf Haziq  robbed by youths pretending that they were helping him. A Twitter campaign, #dosomethingniceforasyraf, is raising money to help his family fly over to visit him in hospital.

The positive side of Mars in Cancer has come out. Pauline Pearce, a Hackney woman was filmed bravely taking on the riotiers and expressing her disgust over what was going on in her neighborhood. Her actions demonstrate that sometimes anger is justified if used positively (click on her name to see the remarkable video if you haven't already). As the days went by, more and more ordinary people were out on the streets protecting their own communities and businesses, taking collective responsibility.

As Mars moved closer to its exact opposition with Pluto (an alignment associated with deep rage and violence), we also saw the positive side of this opposition. The holidaying politicians finally came home and all police leave was cancelled. Mass deployment of officers the likes of which I have never seen, seem to have restored calm. Mars of course symbolizes the police and with Pluto in Capricorn, the force and authority of the police. I would like to salute their tireless hard work.

More generally, Londoners are friendlier, more considerate. They are talking to each other on buses and in shops, asking after each other. There’s a feeling of pulling together, of business as usual, of not letting this beat us.

There’s even an anti-riot tea movement. (FYI, it’s about staying home and drinking tea and nothing to do with the tea party movement in the US.) It’s started selling tea to raise funds to help victims of the riots.

Now that’s the London - the Britain - I know and love.

As a P.S. here’s a brief look at the UK chart, with the relevant transits of the riot chart drawn in. Note how close the Cardinal Grand Cross is to the angles of the chart (marked in red). Indeed, as the Uranus-Pluto squares become exact, it falls very close indeed to the angles of the UK chart. This is the just the start for the UK. I am not a doom and gloom astrologer and not given to making predictions, but one thing is for sure, we now need to begin the process of restructuring our society and moving forward with the profound social and political changes that accompany significant Uranus-Pluto alignments. We have now had too many warning signals to ignore – the banking crisis, the recession, bankrupt countries, stock market crashes, unemployment, not to mention numerous instances of abuse of power coming to light, which in the UK includes the MPs expenses scandal and the hacking scandal, which not only implicated the media, but exposed immoral, maybe illegal practices, within government and police institutions.