The Lid Comes off the Jar ~ Pholus, the Murdochs and the NoW Scandal 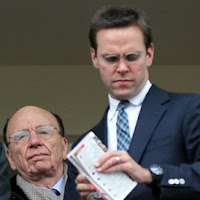 Watching news coverage of Rupert Murdoch’s personal apology to the Dowler family this evening, the reporter likened the whole News of the World scandal to the lid coming off the jar as the revelations continue to unfold in the phone hacking scandal.
The lid coming off the jar reminded me of Melanie Reinhart’s description of the centaur Pholus. It was no surprise then to discover that Murdoch is having a Pholus transit. Pholus is currently positioned at 14 Sagittarius 38 retrograde. Sagittarius of course is the sign of internationalism and publishing. Transiting Pholus is squaring Murdoch’s natal Mercury (news, communication, information) at 15 Pisces 56.  Yes indeed, the lid has come off the jar, as the world finally understands exactly what went on at his News International business and possibly beyond.
Zane B Stein describes Pholus as “like a pressure release, akin to shaking up a bottle of Pepsi on a hot day, and promptly opening it. It's just that the stuff keeps coming out. A genie coming out of a bottle is perhaps a better metaphor, but that, too, comes with the sense of materialization. Pholus has a quality of opening the door to the infinite. Depending on the door, that may or may not be helpful, or seem helpful, but it is what it is and when Pholus has become active, it's necessary to get out of denial and work with the energy consciously.”
You can easily draw your own conclusion about how the themes of Pholus are reflected in this massive current news story.  Stein goes on to say that Pholus, “is the Centaur of fast-moving changes, or rapid transformations.”
Stein also explains how Pholus’ orbit crosses that of both Uranus (shocks, revolutionary energy, breakdowns and breakthroughs) and Neptune (media, deception, scandals). Therefore, it’s safe to assume that Pholus picks up and carries the energies of both planets as it moves through the zodiac and we can easily see those themes here.
Robert von Heeren adds that Pholus is "the catalyst and provider for a landslide-like change (in history for example) and turning points....in some cases, Pholus activity represents or instigates situations in which something gets out and you cannot get it back in, such as when riots begin and the government cannot stop them, or you make one change and it cascades into a series of other developments. This same quality also gives Pholus experiences the quality of a leap to a new level.”
Perhaps we can add that Murdoch’s natal Mercury, in its fall in Pisces, has made self deception and a loss of touch with the reality of a situation an easy space for his mindset to end up in and with that Mercury on his IC, opposing his MC, it's all tied up with his roots, where he came from and how he has expressed himself through his career. Now, with Pholus charging up that Mercury, it’s all coming out, in the most public of ways.
What about Murdoch’s natal Pholus? At just short of 6 degrees of Capricorn, its conjunct his Ascendant (ego, identity), at 2 Capricorn and opposite his Jupiter (again, publishing and internationalism) at 10 Capricorn in his ‘relationship with the public’ 7th house.
Another quality given to Pholus is that is symbolises anything that involves three generations. The whole News International affair centres around Rupert Murdoch and his son James, Chief Executive of News Corporation, which oversees News International. That’s two generations. The third? Well, today, when Murdoch Snr. personally apologised to the Dowler family, he is reported as saying that the News of the World’s actions were not the standard set by his journalist father. Remember, his natal Mercury on the IC (roots, father) is receiving a transit from Pholus. We can easily surmise that Murdoch can imagine his father telling him how ashamed he is by what has happened.
James Murdoch, born on 13 December 1972 in Wimbledon London (source Wikipedia) has three planets in Sagittarius (Sun, Mercury and Neptune), the sign that Pholus is currently transiting. More remarkably, transiting Pholus is currently opposing his Saturn (authority, lessons, karma, taking responsibility, father issues) at 16 Gemini 44. Natally, Murdoch Jnr. Has Pholus at 1 Pisces 47, tightly square his natal Mercury at 0 Sagittarius 29.
The lid really has come off the jar in a nuclear reaction type fashion and the astrology is strongly suggesting that these two men, the mastheads at the front of the whole saga, must take responsibility and try to right the wrongs of the past, not just their own personal wrongs, but the crimes and misdemeanours of their whole tribe of news makers.
With love,
Mandi
http://www.mandilockley.com/
Pholus info from http://en.wikipedia.org/wiki/Pholus_(astrology)
Special thanks to http://www.serrenu.com/ for the Pholus ephemeris.
Chart data for Rupert Murdoch from http://www.astro.com/astro-databank/Murdoch%2C_Rupert
http://www.zanestein.com/chiron.htm
Additional research: www.bbc.co.uk/news
at July 15, 2011