Feeling good about Jupiter in Cancer 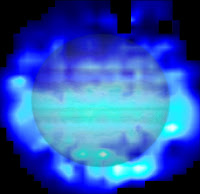 Ready for some good news at last?

Well, Jupiter moves signs this week, a yearly event which is always a cause for optimism.

After just over a year in Gemini, the planet of growth, hope and expansion, moves into watery, sensitive, moony Cancer.

The major themes of Jupiter in Cancer are explored below and where Jupiter touches something in our chart we are presented with an opportunity:

~ Easy creativity and emotional flow, if we're prepared to tap into it, when it Trines planets in Scorpio and Pisces

~ Opportunity knocks when it aspects planets in Taurus and Virgo by Sextile, but it's up to us to seize it when it comes

Tips for your Jupiter transit:

~ You need to put a little effort into it, so if opportunity comes a-knocking, don't forget to answer the door. You've got to be in it to win it!

~ Don't court disappointment by expecting too much. Jupiter transits don't tend to be transformative, but they can make life a little easier and help set you on your way

~ Your Jupiter in Cancer transit may coincide with a transit from another planet, such as Saturn, Uranus, Neptune, Pluto or Chiron, particularly if your transited planet or point falls early in its sign...

~ ...If this is the case, Jupiter may expand and inflate the influence of that transit. It may add a sense of purpose and responsibility to a Saturn transit for example, intensify a Pluto transit, exaggerate/stimulate a Uranus transit or glamorise/discombobulate a Neptune transit

~ Cancer is cardinal sign. It calls for action. It's up to you to answer the call, but your patience could be tested if you don't see immediate or far reaching results.

Why Jupiter into Cancer is an important ingress:

First up, it's not in Gemini any more. In the tradition, Gemini is the sign of Jupiter's detriment so it wasn't very comfortable there. In Cancer it is much, much happier. It is exalted.

To exalt, according to the dictionary, is to extol - glorify - elevate - praise - raise - extol - honour. Jupiter just loves that! In essence, in this sign its influence is more positive.

Secondly, Jupiter in Cancer makes significant connections with other current planetary alignments. Here's an edited extract from my Saturn in Scorpio book, which places these alignments in the bigger picture:

Between October 2012 and July 2013, Saturn in Scorpio forms a Trine aspect with Neptune in compassionate Pisces. During the course of this Trine, the human effect of all the change and disruption we’ve been experiencing in the world will become more and more obvious and its victims harder to ignore. We will be made to understand the emotional effects that the long running financial crisis has reaped. For those sitting safe, it will be easy to sweep this under the carpet, but hopefully this Trine will inspire individuals and the collective to feel compassion for those who are suffering and take some responsibility for supporting them.


In June 2013, ethical Jupiter moves into Cancer and forms a Water Grand Trine with Saturn and Neptune. If we are being optimistic, throughout Saturn Trine Neptune, but especially while Jupiter is in the picture, we can predict peaceful resolutions, treaties, new understandings and a more compassionate idea of morality. This is an opportunity to show that we care and to do something practical about it. If we want to be cautious, we should be wary of those who merely pay lip service to compassionate actions and humanitarian causes, while surreptitiously pursuing their own agenda.
At the same time that Jupiter in Cancer forms a Grand Trine with Saturn and Neptune, it also opposes Pluto and Squares Uranus, forming a cardinal T-Square. This links the Grand Trine with the Uranus-Pluto Squares, giving the closed-circuit energy of the Grand Trine a channel for release. The hope here should be that the reactionary, rebellious nature of the Square will be injected with a loathing for violence and a longing for peace and harmony. This could turn into a new mass movement, perhaps marking out the summer of 2013 as the new summer of love.


Looking at it from a less positive perspective, this Grand Trine could also open the way for floods, landslides, tsunamis and other water based calamities.
The Grand Trine could also dilute the forceful message of Uranus Square Pluto, causing disillusionment, misplaced idealism and deception. While Uranus and Pluto are busy re-writing the rule book, Saturn in Scorpio provides the opportunity for society’s powerful to furtively re-write their own, secret, rule book, thus rooting their control over the rest of us ever deeper.

Jupiter in Cancer will exaggerate the effects of Uranus Square Pluto and Saturn Trine Neptune.

The major themes of Jupiter in Cancer explored. These can be applied personally to your own chart or to world events:
Jupiter enters Cancer June 26, 2013 and leaves July 16, 2014.

I hope you enjoy Jupiter's transit through Cancer.

To celebrate my Jupiter Return I discounted my e-book Saturn in Scorpio: Your Guide Through the Dark until the end of June, but because I'm excited about Jupiter moving into Cancer and because it will be making a nice opposition to my Sun in early Capricorn, I'm extending the sale to 14th July.

It is now available on Kindle from Amazon at $3.99 and equivalent in other currencies (normal price $5.99) or you can buy a PDF via PayPal direct from this blog for £4 or equivalent (normal price £7), just click the Buy Now button at the top right of this page. Please note all PDF orders are sent out manually so there may be a delay of up to 24 hours between placing your order and receiving your book.