The Downfall of Bill Cosby 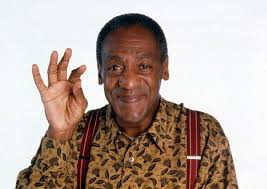 The super famous seem to exist in an entirely different universe, like those distant twinkly constellations glimpsed on a dark night. As we watch them on the screen, spinning dream-like illusions, it’s hard to imagine that their lives are subject to the same laws as us mere mortals.

These are the beings, like the Gods on Olympus, who are allowed to behave badly and get away with it. And yet, under a Pluto in Capricorn world, that seems to be changing. Bill Cosby is the first high profile star of the #MeToo era to be criminally convicted (on three counts) of aggravated indecent assault, after drugging and assaulting a woman at his home in 2004. He was first tried for these offences in June 2017, but the case ended in a mistrial. A retrial was held in April 2018 and according to the District Attorney Kevin Steele, “he seemingly thinks that he hasn't done anything wrong. The jury thinks otherwise," and a guilty verdict was returned. On September 25, the 81 year old was sentenced to a three to 10 year custodial sentence.

Cosby - with his Sun at 20 degrees Cancer, Conjunct Mercury and Opposite Jupiter in Capricorn - secured his name in the stars with the lead role in the eponymous The Cosby Show, a joyful and extremely popular sitcom. It ran for eight seasons with Cosby as Dr. Cliff Huxtable, a clever, funny and wholesome family man and dedicated father, the beating heart of a tight knit family. Living up to the promise of his Cancer Sun Opposite Jupiter in Capricorn, he became a household name and earned the moniker of America’s Dad.

Sun and Mercury are also Conjunct Pluto in Cancer. Pluto has often been cited as the ruler of the black race and the show received praise for portraying a black family as stable, prosperous and successful, breaking with prevailing racial stereotypes. 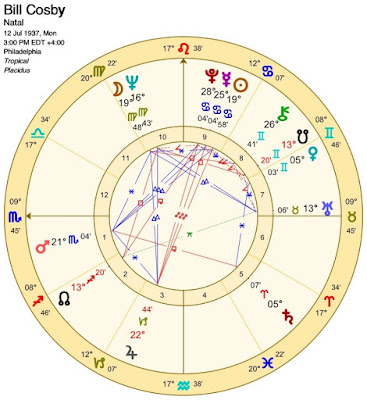 The only fixed sign planet in his chart, Mars in Scorpio (wilful and sexually intense), Trines his Cancer planets and Sextiles his Jupiter. The Moon at 19 Virgo Conjunct Neptune, Sextile his Sun complex, perhaps signifies how much he fell into the illusion of the role he played, the safe and perfect family guy, and how much his audience also bought into it.

His conviction occurred under Pluto’s Opposition transit to his Sun in Cancer in particular and his other Cancer planets by association – transmuting his identity from homely family man to, as the Pennsylvania Sexual Offenders Assessment Board has recommended, classification as a “sexually violent predator”. 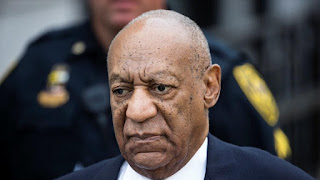 Transiting Pluto cuts through illusions to reveal the naked truth, however ugly and for Cosby, it has marked the symbolic death of his old identity and a rebirth into something entirely different. That Cosby seems to have failed to surrender to the process and take responsibility for his crimes, surely increases the suffering for all involved.

Note that during the original trial, transiting Uranus in Aries was exactly Square his Mercury-Pluto Conjunction (disruption to the status quo, challenges to a deeply held mind-set, shocking revelations, breaking down the details to shine a laser beam on the truth). However, transiting Pluto was still shy of its first Opposition to his Sun.

The crimes for which he was convicted first surfaced in 2005, when Andrea Constand, a member of staff at Cosby's former university, alleged she had been drugged and then molested by the star at his home in 2004.  A number of other women made similar allegations against him, but this was the only case that made it to court. In 2004, transiting Saturn in Cancer crossed Cosby’s Cancer stellium and Trined his Mars and transiting Pluto in Sagittarius Quincunxed his Cancer Sun. Built into these transits is the Sagittarian ideal of justness and the Saturnian idea of not getting away with it, however long it takes for justice to prevail.

Constand, taking about her assault, said the drugs he gave her had left her "frozen" and unable to move when the sexual assault took place. This is interesting in the context of Mars in Scorpio. It’s said that Cancer is contained water, Pisces is free-flowing water and Scorpio is water in its frozen form. With Mars signifying sexual desire and Scorpio about control, a naturally fiery planet in a cold sign, the imagery fits. Which is not to say, of course, that all Mars in Scorpio natives are sexual predators, nor that all sexual predators have Mars in Scorpio!  It’s notable however, that Cosby’s custodial sentence comes at the time of transiting Jupiter in Scorpio exactly Conjunct his Mars. This reminds us that Jupiter transits are not just about growth, optimism and good luck, they’re also about justice and integrity.