It's the news astrologers have been waiting for for centuries!
Professor of astrophysics, William Kapteyn and his PhD student Alex Whitehead, have accidentally proved astrology, it has been alleged.
Planets
The Professor had been conducting controversial research which involved artificially re-creating in his laboratory the magnetic energies of the solar system planets of Mercury, Venus, Mars, Jupiter and Saturn. He then tested each of these environments on laboratory rats.
Rats 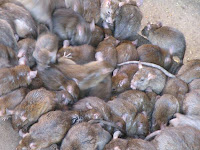 It was Whitehead, who first noted that the rats’ behaviour differed according to which planetary energy they were exposed to. He found that when the rats were exposed to the energy associated with Venus, they tended to spend more time grooming themselves and each other than would be considered normal. Those exposed to Mars’ energies tended to be more aggressive and sexually active. Rats exposed to the re-created Mercury energy become fidgety and more visibly nervous. Under Jupiter’s magnetic energies the rats ate more and gained weight and with Saturn, they seemed to go off their food and become socially withdrawn. A control group of rats, exposed only to natural Earth energies, did not display any of these variations in behaviour.
Hippies
Whitehead first made the shocking correlation with astrology after he discussed the results of the tests with his wife, who apparently, ‘had been a bit of a hippie back in the day’. She suggested that the rats’ behaviour under each planet’s unique energy correlated somewhat with what astrologers say about the influence of those planets on human behaviour. Whitehead was intrigued and conducted several more experiments before discussing these strange findings with Kapteyn. It is reported that Kapteyn was sceptical in the extreme at first, even after seeing Whitehead’s results, but agreed to more stringent tests, all of which yielded very similar results to those that Whitehead had initially observed.
Hiding
Last month, their research notes were stolen from their laboratory and leaked to the wider academic world, to be met with derision from all quarters. Their research grant was withdrawn and both scientists have gone to ground and are refusing to comment, amid rumours that there have been threats to strip Kapteyn of his Professorship and to throw Whitehead off the PhD programme.
at April 13, 2010

Email ThisBlogThis!Share to TwitterShare to FacebookShare to Pinterest
Labels: humor