Synastry ~ Shining a Light on the Sun

Have you ever wondered why you get along easily with some people, but struggle to find a rapport with others?
In astrology, the study of relationship compatibility is called synastry, or chart comparison. For the second in an occasional series of articles on synastry, here’s a look at Sun connections between charts.
The Sun in our chart represents our source of energy and how we use it. By sign, house position and aspect, the Sun suggests where best we should channel our energy in order to grow and fulfill our life’s purpose. It also hints at the challenges and lessons we might expect to meet along the way. As such, it represents our own personal hero’s journey – our vitality, willpower, ego identity and the creative urge. Expressing our Sun is a mission, something we need to learn to do, to aspire to.
Whenever we meet another person whose aims, goals, mission and energetic expression are similar to or compatible to our own we ‘get them’. We tend to feel a rapport with them, or at least we can understand where they’re coming from. On the other hand, when we meet someone whose expression is very different from our own we can have difficulty understanding where they’re coming from. While we may feel intrigued and attracted to the different energy, getting along together presents us both with a challenge.
When judging Sun compatibility between charts, we really need to look at the whole picture – the Sun’s sign, aspects and house - but simply looking at the basic Sun to Sun aspects in isolation is the best place to start and we can build from there.
Of course, when comparing charts the two Suns might not form an aspect. If this is the case, look to the general compatibility by sign and element. The following will still apply, but it will be a less intense connection.
Sun conjunct Sun (or Sun in the same sign):
If your Suns are conjunct, think of all those joint birthday parties you can enjoy! For two Virgoans or Capricorns, that might be a great thing (think of the money you will save by throwing a shared bash), but if you’re two Leos, do you really want to share the occasion with another limelight hogger? This sounds a bit flippant, but the point is that this connection can very much depend on the sign the Sun is in. However, generally speaking, you have similar ways of expressing your energy and ego and your life’s lessons, missions and purpose are compatible. While you may be at very different stages in your journey, you are traveling in the same direction. You can really identify with the person who shares your Sun sign and this can be an easy, supportive relationship. The danger of being so alike is that you can too easily become aware each other’s weaknesses. If this happens, take note, because there is a lesson in it for you both. Rather than actively disliking the other person, remember that they are most probably highlighting something you don’t like about yourself, or something you are in denial about and need to work on.
Sun opposition Sun (or Sun in opposite signs):
Opposites attract! This aspect is very commonly found between friends and lovers. Opposites might well attract, but they can also repel and often can attract-repel at the same time, which makes this aspect very interesting. At best, you will complement each other nicely and find the relationship stimulating and mutually supportive with a nice balance of egos. This is because despite the differences between opposing signs, they also share common concerns (click to read more). At worst, there can be no real relationship because you are constantly pulling apart, moving in completely opposite directions. It can even be both at the same time…Yes, the classic love-hate relationship is a possibility here.
Sun square Sun (or Sun in the same mode):
Square aspects are challenging and dynamic. They call for action, often in response to conflict, but dealing with conflict successfully can lead to valuable growth for both individuals involved. Planets square other planets in the same mode as themselves, so planets in cardinal signs square planets in other cardinal signs and so on. The graphic to the right explains all. In relationships where your Suns square each other, you tend to tackle the obstacles and problems you meet on your life journey in a similar style, but because your overall temperament and life goals differ, this can sometimes lead to a frustrating relationship dynamic. Attraction can feel strong between you but just as easily so can dislike! Relationships between cardinal signs can become blighted by over-competitiveness, fixed relationships can feel possessive and stuck and mutable relationships can have a tendency to drift. Ultimately though, Sun square Sun in synastry, if expressed healthily and with conciousness, is a contact which can lead to growth and personal development for both concerned. If you can work out your differences you can achieve a lot together.
Sun Trine Sun (or Sun in the same element):
When your Sun trines somebody else’s Sun, it suggests an easy, supportive, harmonious relationship. You tend to ‘get’ each other, feel comfortable holding hands along life’s journey together and feel nicely energized by each other’s company. However, if you want dynamism, growth and a little exciting tension in your relationship, you might need to find that in other aspects between your charts. Planets trine other planets in the same element as them, illustrated in the graphics below (click on each graphic to enlarge).

Sun Sextile Sun (or Sun in a compatible element):

Sextiles, like trines, suggest an easy, harmonious relationship. It’s generally a supportive relationship which benefits both parties, because the element your Sun is in, is compatible with the element the other person’s Sun falls in. However, the sextile does need a little more work than a trine to make the most out of it. At best, sextiles between your Sun and another person’s Sun present an opportunity for you to help and encourage each other to achieve your life goals.
Sun Quincunx Sun (or Sun in natural quincunx by sign):
Planets in quincunx just don’t get each other at all. Unlike the square aspect they do not share the same mode and neither do they share compatible elements. When our Suns are in quincunx by 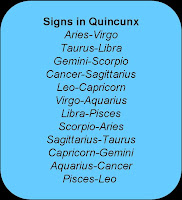 
*Published with permission. Names have been changed.
at February 19, 2011