A 'Boring' Blog about Mercury Retrograde

This year, we are being treated to four Mercury Retrograde periods instead of the usual three, so this upcoming Retrograde is number three – eeek!

On the 7th September (6th September if you are West of Europe) Mercury Stations Retrograde at 6 degrees of Libra, travelling backwards to 21 degrees of Virgo before Stationing Direct on 30th (29th) September and moving forward again. If you want to take the longer view, the effects of this Mercury Retrograde started on 17th August and go on until 15th October. This factors in the ‘Shadow Period’, which I won’t go into because it’s boring and difficult to explain – forgive me, I have Mercury in Sagittarius! 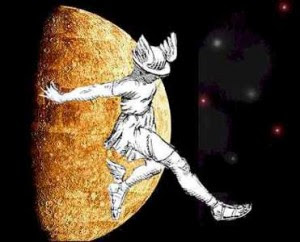 I have to say that much is said and written about Mercury Retrograde and it is often feared as a time when everything is likely to go wrong, especially anything to do with communication or travel. I don't totally agree with that, after all, Mercury is the Trickster planet and he's the planet of the mind, so he loves to fool us into worrying unnecessarily.

The retrograde period may not even affect you at all unless it is hitting trigger points in your personal horoscope. That said it’s always a good time to take extra care when doing the 'things' which are ruled by Mercury. Thinking things through properly and double checking the details is worth the effort. It's also worth putting off signing any major deals, documents and contracts during a Mercury Retrograde if you can. Not necessarily because it will be some great big disaster if you do, but because you may end up having to go over everything all over again at a later date, which in itself is annoying and irritating.

Mostly, Mercury Retrograde is a time for review and in Libra (7th – 17th September) it might be a good time to review and re-value your relationships or to address how you share, yield and give yourself to others

When Mercury Retrogrades back in Virgo from 18th -30th September, it is all about checking the details, doing a bit of personal housekeeping, simplifying your routines, perhaps reviewing your diet or health regime or breaking a bad habit. Mercury Retrograde in Virgo aspects the Virgo New Moon on the 18th September, suggesting that making a fresh start in these areas, around this time, puts you in tune with the astrological weather.
See also the follow up to this blog: Mercury Retrograde How Was It For You?
Still reading? Here’s a little true-life Mercury Retrograde story to illustrate what can go wrong and that it’s not really all that bad.

In 2005, I went on a business trip to Madrid to organise for a bunch of 50 consumer prizewinners from all over Europe to spend a weekend there and go to a cool party to celebrate Europe’s best bar. Guess what? Mercury was Retrograde in Sagittarius, the sign of travel no less! I had to fly 50 kids from 20 countries all to one place all at the same time! Impossible? Well, knowing my astrology, I checked and double and triple and quadruple checked all the details over and over and made the girl working with me do the same.
And guess what? Everything was correct, we made no mistakes, we’d beaten Mercury Retrograde – yay! We forgot that we couldn’t control everything and that’s where Mercury snuck in to trick us. Four kids from Italy missed their flights, just simply didn’t get to the airport on time and had to take the next flight. On top of that, the client had arranged for loads of goody bags to be sent to the hotel for the winners. They got stuck in some warehouse in Madrid and arrived at the hotel after most of the kids had gone home! We had to lug the stuff all the way back to London with us and send them on from there! All pretty much par for the course for Mercury retrograde. But hey, we still had fun, no-one got hurt and no-one was complaining, except from their hangovers!!!
I offer personal consultations, based on your time, place and date of birth. If you are interested, email me at mandi@mandilockley.com or see my website at http://www.mandilockley.com/
at August 21, 2009