The New Year bells ring in with a Lunar Eclipse in Cancer. This eclipse reminds us that Cancer is the only cardinal sign not set to be inhabited by an outer planet this year. Jupiter moves into Aries in June; Saturn is in Libra (albeit with a Retrograde back to Virgo between April and July); Uranus dips his toe into Aries between late May and early August and Pluto remains in Capricorn.
These planets, along with Mars in Libra, go on to form a much anticipated cardinal t-square in late July 2010, a formation which has been widely dubbed the ‘Cardinal Climax’ (pictured below). Please note and I can’t say this strongly enough, this so-called cardinal climax is not a one-day, one-off event. This has been building since 2008 and runs right through to 2012/3. 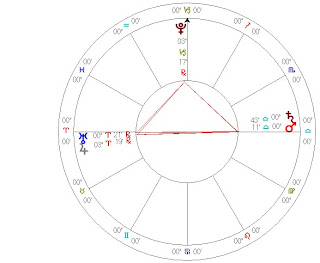 The Cardinal Climax Planetary
Formation
So much has been written about it and I’ll point you in the direction of a few writers at the end, but in short, it symbolizes huge change, disruption, upheaval, shock, rebellion, upset in the status quo and an awareness of our limitations. We’ve already been experiencing this for sure. The credit crunch, the banking crisis and the world recession all fall under this symbolism.
It is blatantly apparent that urgent changes are necessary to our economic structure, our consumer behaviour, our political tradition and our relationship with the earth itself as concern mounts over climate change and the sustainability of our precious resources. There are no doubt more shocks to come and further harsh realities to face.
The good thing about these cardinal sign energies is that under tension they don’t mess around procrastinating, they get straight to the point and take action, knocking down any obstacles as they come up. The bad thing about cardinal energies is that sometimes, in the imperative to ‘do’ something, focus, direction and strategy goes out of the window and we are in the realm of reactionary crisis management (which is how the financial crisis has been handled so far) rather than meaningful, targeted action for creating long term stability.
The point is that any action must be correct action. Perhaps, therefore, we should be grateful for the heavy energies of Saturn in Libra (balance, right justice, honest hard work, fair compromise) and Pluto in Capricorn (the transformation of traditional, authoritarian and administrative structures, the coming to power of wiser, more mature influences). While we may not enjoy their methods, if these two can’t put us on the right track, metaphorically speaking, then I’m not sure what can!
However, I’m sure, finally, hopefully, that these current times will ultimately come to represent positive transformation and creative breakthrough. I predict that we will increasingly see these energies reflected in a more positive way in the arts and in our culture and society in general. For example, I believe we are set to witness new cultural movements rising from the grassroots and social change hatching at community level and gaining serious momentum, as us common masses increasingly learn to self organize at ‘street’ level. We have already learnt to do this very successfully through social networking media and other technologies since Uranus in Pisces and Neptune in Aquarius have been in mutual reception (i.e. in each other’s signs), seen in, for example, the rapid spread of viral campaigning.
When it comes to right action, Uranus when it’s in Aries won’t wait for permission to create change and neither should we. To quote the Hopi, “we are the ones we have been waiting for”.
Back to the more immediate present and the lunar eclipse in Cancer on 31st December. With Cancer as the empty leg of the cardinal t-square (the only cardinal sign not inhabited by an outer planet in 2010), we need to be reminded to make time for home, family, security, nurturance and reflection amidst all the change and disruption to come. For me, this is also a clarion call for us to truly honour the feminine spirit, to nod to the goddess, the moon and the mother energies within ourselves, our spirituality and our world. Even more potent is the fact that there is a total solar eclipse in Cancer in July, just days before the cardinal climax focal point and I will look at this chart in detail nearer the time.
The New Year eclipse chart (below) foreshadows this need for feminine energy and reflection, showing as it does a pile up of planets in worldly, masculine Capricorn. The Sun, Venus, North Node, Pluto and a Retrograde Mercury all in the sign of the goat are opposed by a lonely Moon in Cancer, who is taking the strain as the handle of a heavy ‘bucket’ chart formation. Saturn in Libra squares the Moon, balancing the weight a little, but slows things down, especially as Saturn is moving towards his Retrograde Station on 13th January, A lazy Mars, still Retrograde in Leo doesn’t provide much assistance either. 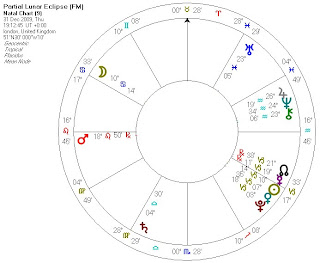 Will we start 2010 on an energetic high? I don’t really think so. Early ’10 seems to me to be more a time to prepare for spring, when the dynamic energies start to build again. Come spring, we come into energies of dynamic forward movement and hard, hard work and we will need to maintain balance by ensuring we have somewhere to retreat to, emotionally and physically, where we can rest between bouts. Like the crab, we will need to learn to protect that space and will be impelled to set firm and stable boundaries to ensure that others respect them (a message of Saturn in Libra).
Also in early 2010, Mercury turns direct on the same day as a Solar Eclipse in Capricorn, 15 January. Three days later, Jupiter moves into his spiritual home of Pisces, to pave the way for Neptune’s entry to Pisces in 2011. However, as the idealistic Jupiter-Neptune-Chiron conjunction fades away, I feel that the healing energies will carry us forward for some time yet, especially as Neptune and Chiron make one further conjunction in mid February.
If the Jupiter-Neptune-Chiron conjunction manifests in its more negative form by making us fall for over-idealistic notions and escapist illusions, we are soundly brought back down to earth at the end of January, when Saturn and Pluto make their second exact Square aspect, at four degrees of Libra and Capricorn. The first contact was in November 2009, with the final showdown in August 2010. However, because of the ‘Cardinal Climax’ mentioned above, the energies of these two heavenly heavyweights will be felt for some time to follow. The forced changes that often accompany the moving aspects between these two planets can feel very difficult, but at a deeper level we know they are a necessary step in our healing and empowerment, as individuals and as communities.
On March 10, just in time for spring, Mars in Leo turns direct, finally passing out of the shadow of his retrograde in May (when he returns to 19 of Leo, his original turning point). Creative energies can then start moving in the right direction again. Until at least March use your energies wisely, as this is a very good time to take a creative restock, rest, and plan.
Going deeper and into more difficult territory, 2010 is also an opportune time to face and transform any issues of grief, rage and frustration. Unattractive shadow emotions for sure, but ones which may well come up for a bite. Getting them out in the open in a healthy way in early 2010, is a good plan if you feel affected. I discussed some of these issues in my blogs on Saturn-Pluto and Mars Retrograde and I recommend Donna Cunningham’s Sky Writer blog has many useful posts to help with this stuff, filed under A Pluto-Saturn Preparedness Kit and under Mars Retrograde.
In April, the status quo shaking Saturn-Uranus oppositions which have been with us since late 2008 make their fourth exact hit of five. Saturn will have retrograded back into Virgo and this will be the last of their oppositions across the mutable Virgo-Pisces axis. For their final bang in July, Saturn will be back in Libra and Uranus in early Aries, both squaring Pluto in Capricorn, forming the Cardinal Climax.
As an end note, rather than a ‘Cardinal Climax’ perhaps we should find a new term for this very important planetary configuration, something a little less apocalyptic and dramatic sounding. Rather than a climax (which suggests an ending), it is in fact, at the final count, a new beginning, a chance for a fresh start, for a better future. This is what the cardinal signs are about, heralding as they do the changing of the seasons and marking the ever turning cycles of the Sun, the life giver of our small, but precious planet.
Let’s not squander the opportunity.
Blessings for a happy 2010
Mandi
http://www.mandilockley.com/