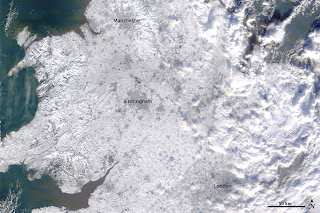 England under snow January 7th 2010. Photo: NASA
How have the first few days of January been for you so far? 2010 started with an Eclipsed Blue Moon on New Year's Eve and next week, 0n 15th Jan, there is an Eclipsed Capricorn New Moon.
Eclipses come in pairs and the couple of weeks between them can often feel like a bit of a strange time and, from my perspective at least, the beginning of January has been no exception.

Mars is still Retrograde in Leo, reflected I think in the fact that motivation, enthusiam and energy to get stuff done feels a bit off key, low and slow. And as if that wasn't enough, many of us have literally been prevented from moving around at all in the UK due to sustained extremes of weather we're just not used to.
Of course, Mercury started his backward dance through the zodiac on 26th December so we might have expected some travel chaos, but it started early thanks to some heavy snowfall just before Christmas and for a while I seriously doubted that I would get to see my family due to the icy road conditions. Fortunately, I made it and had a lovely Christmas, but the usual January back to work slog has been seriously slowed down in the UK by more snow, the heaviest and most sustained since the early 1960's! My in-laws, who live in a pretty little village near Oxford, are quite literally snowed into their house! More harsh winds and snowy weather are forecast for the next week or so.
So, will the Capricorn energies of January 15th's Solar Eclipse help us get back to some kind of normal and organised shape after what has seemed in some ways like a chaotically extended Christmas break? Well Mercury goes Direct on the same day, so there is indeed some hope.
Saying that, some of us might actually be enjoying this disruption. I for one have loved the snow, but then I've been lucky that my transport links to work and back have been OK and I have a cosy warm home to go back to. I also have a nice pair of Hunter wellies so my feet stay dry and warm while I'm trudging through the snow, with the added bonus of also being fashionable - lol! I feel for my colleague Debbie who has been facing a three hour commute to work and back every day, if she managed to make it in at all.
Let's also hope that Scottish couple Kay and John Ure, who have been seperated by the heavy snow since Kay popped out to pick up the turkey on 23rd December are finally reunited! Read their story here>.
Safe travels,
Mandi
My Garden in the Snow 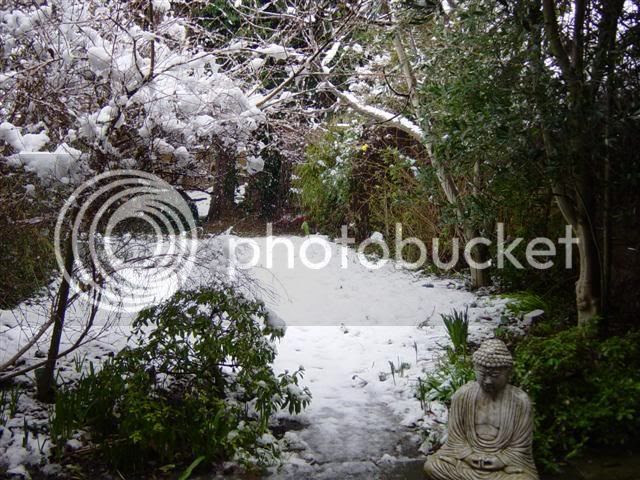