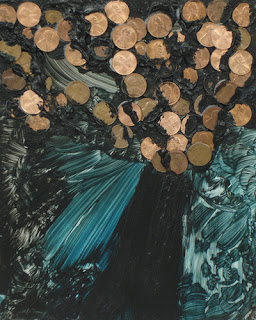 Pennies from Heaven by Ginny Gaura
When the Sun moved into Libra on 22nd September, it ushered in a new season, setting the cosmic agenda for the next three months. Themes of partnership, finding balance in our lives and seeking renewed hope and faith in life dominate, as well as more than a hint of passion and desire (for more detail see my post The Libra Equinox).

October continues along the same lines. On the first of the month, Mercury, still in Virgo after its recent retrograde, opposes the Jupiter-Uranus conjunction. If you’re lucky, this alignment could bring a huge sense of relief, as a penny drops from heaven just at the right time to help you make a change you need. At the very least, it’s an aspect that can help you develop a positive mindset and a fresh approach to an old problem.

Then on the October 3, Mercury moves into communicative, collaborative Libra, helping you to help others to help you. This new energy is good for smoothing out relationship glitches and overcoming conflicts fairly and diplomatically.

Make Up Sex / Break Up Sex

Relationship planets Venus and Mars have been travelling together for a while now. In August, they conjoined in Libra, the sign with the mantra ‘I Balance’. This conjunction supported the serious relationship work the Saturn in Libra energies have been urging us to do. On October 3, Venus and Mars conjoin again, this time in passionate Scorpio. The mantra for Scorpio is ‘I Desire’ prompting us to follow our passions at this time, particularly in the relationship arena. It is up to us to decide whether we channel the positive, regenerative, recuperative strength of Scorpio or whether we give in to dark, controlling, destructive urges. Under this conjunction the energies of Venus and Mars are bound together, their energies merged in union. We decide, symbolically speaking, whether they represent make up sex or break up sex as well as who gets to go on top.

Time For A Break

Oh my, I’m already exhausted at the thought of all the relationship work that needs to be done in October…and then there’s a Libra New Moon to contend with on October 7. The dark of the Moon is always a good time to go within and this one in Libra is excellent for taking a short break and seeking a bit of equilibrium in our lives…not just in our relationships, but holistically. I love New Moon times, but maybe that was because I was born just after a New Moon. Come back here on the 7th for a Libra New Moon meditation….

Where Do We Go From Here?

Fresh from the New Moon, Libra’s planet Venus turns retrograde on October 8th in passionate Scorpio. This energy urges us to go inside ourselves (if we haven’t already) and find a fresh perspective on those relationship matters that have been complicating our lives for so long. Where do we go from here? Is this a fair, balanced relationship? Is the passion spent? Do we need to make a fresh start, one way or another? These are some of the questions that we might need to ask ourselves as Venus travels backwards, re-entering Libra on November 7, before finally turning direct on November 18.

How was the Aries Full Moon for you on September 23? Intense probably, as it picked up on those sensitive, potentially explosive early cardinal degrees. Well, brace yourself, because we are in for another Aries Full Moon, on October 22/23, making this a rare and special Blue Moon. This one falls across the very last degrees of Aries and Libra. The last degree of any sign brings a sense of urgency, of things that need to be resolved. Think back to the September Full Moon for clues and contemplate the differences and similarities between Aries and Libra. Aries says ‘I Am’ and Libra says ‘I Balance’, or in other words, ‘We Are’. Where do you stand on this? Where do significant others stand? Where is the meeting point? Do you need to find closure around a certain issue? Thankfully, Full Moons are times of full exposure, so you should have all the facts at hand to help you decide which way to go.

As October starts to wane, the sky moves ever forwards, ushering in more of those passionate Scorpio energies, with communication planet Mercury entering the sign of the stinging scorpion / soaring eagle on October 20 with the Sun following suit on October 23. Come back here after that for a selection of sexy quotes from some deeply famous Scorpios.