The polls open in the UK general election at 7am on May 6 2010, so I thought it would be an interesting exercise to look at the chart for polling day.

I’m using the basic principles of Mundane Astrology here. For more info on what the planets and houses represent in Mundane, see Skyscript.co.uk 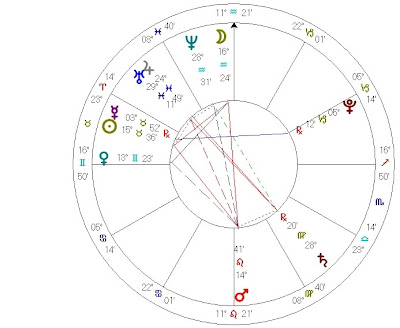 The Country and its People

The people, the common voters, are represented by the Moon. The Moon is in the 10th house in the fixed sign of Aquarius. The 10th house is a good position for the Moon in the chart for an election day. With the 10th representing government, this position indicates that the people have the power to make a difference with their vote. However, the Aquarius position of the Moon (which has no essential dignity) suggests that the people are indifferent to the government. Perhaps they’ve had enough of disruption, debate and broken promises. They want stability and equality and they want to protect their jobs and keep their incomes stable (the 10th also represents employment). Moon in Aquarius also reflects the fact that this is a very important election for those who work in and who need the country's public and social services. There are service, budgetary and job cuts looming in that sector as the incoming government will need to reduce public spending.

The current Prime Minister is represented by the Sun. At 15 degrees Taurus, the Sun has no essential dignity and is in the 12th house. The Prime Minister is weak. He’s further weakened by the fact that Mars is in a tense square aspect to the Sun. Mars represents the parties opposing the Prime Minister in this election (notably the Conservatives and the Liberal Democrats). However, it is a separating square, perhaps suggesting that the opposition parties will have done their worst by the time the British people go to the polls.

Mars (the Government's opposition) is very well placed in the 4th house because the 4th is the house which represents the opposition to the Government. Mars is therefore a threat to the Government. However, Mars has no essential (or accidental) dignity here, weakening its position somewhat. Perhaps this reflects that there is not one party alone which threatens the Government, but two, as the polls suggest that both the Conservative and Lib-Dems are in the running, but that neither opposing party has enough support to win the election outright. Maybe the Conservatives (Mars) were previously the big threat, but now that Mars is separating from its square to the Sun (the Prime Minister) the threat is not so great anymore. This is clearly seen in the fact that the Lib-Dems have recently established themselves as serious contenders. It really seems to be a three-horse race now and at the time of writing, the UK is facing the strong possibility of a hung parliament in which no party has an overall majority. Maybe the fact that the planet of Government opposition (Mars) is in the house of Government opposition (4th) - an astrological 'double whammy' - suggests the two party opposition Labour is facing, the Conservatives and the Lib-Dems.

Where might the idea of a hung parliament be indicated in the chart? Perhaps the strongest indicator is Venus on the Ascendant. Venus represents diplomatic resolutions, the careful balancing act (which would be needed in a hung parliament) and it’s in Gemini, the sign of flexibility and duality - two-ness - indicating that the Government will need to form an alliance with another party, perhaps form a coalition government in order to get anything done in parliament. This isn’t a good or stable situation for parliament to be in, bearing in mind that the dispositer of Venus in Gemini, Mercury, is unhappily Retrograde in the 12th house of secret enemies and self undoing.

The Role of the Media

This weak Retrograde Mercury also represents the media. Who knows what is going on behind the scenes (12th house) in the media, who is feeding them spin and propaganda? Well it seems to be Pluto (suggesting that much is going on away from public view), which makes a trine to Mercury. In previous elections the media have had an enormous influence, but in this election it’s hard to see that, well not in any obvious way. Everything to do with the media during this election seems rather murky indeed! Can we believe anything they say?

Jupiter is interesting in this chart. This is because Jupiter is the strongest planet in this chart – he’s in the sign of his rulership, Pisces and in the house of his joy, the 11th, the house of friends and aspirations. In mundane astrology, the 11th also represents parliament, the House of Commons in particular. Jupiter rules a nation’s wealth, its banks and bankers, its legal system, prominent law makers and other people who are elevated in society. There is a sense here that parliament has friends in high places, that these people will assist government and receive benefits in return. Jupiter is afflicted by an applying opposition from Saturn Retrograde in Virgo. This is one of very few applying aspects in the chart, symbolising future public disappointment from the public on how the wheels of government are oiled and run. Is it going to be back to business as usual, despite the lessons of the expenses scandal? Jupiter also conjoins Uranus, which in mundane astrology represents right wing politics, suggesting an overall swing to the right, especially as Uranus is in his own domicile, the 11th house. Neptune, which represents the Left wing, is not doing much in this chart, sitting up in the 10th it’s in the house of Government, but not making any aspects.

Overall, this chart suggests that perhaps the Left won’t be totally defeated, there will still be a Labour Prime Minister, but an ineffective one, without an overall majority. I’m going to go out on a limb here and suggest that it will be a hung parliament between Labour and the Lib-Dems. A situation like this gives the Conservatives (the Right) a lot of power and influence because both Labour and the Lib-Dems would need the Conservative’s support in order to stay in government and to have any hope of making the changes they have promised in their election campaigns.

Finally, don't forget this election takes place under a Saturn-Uranus opposition. If nothing else, expect shocks, surprises, change and big upsets to the status quo!

The Jupiter Saturn Cycle and the Economy

If we are going to be positive, we could say that this strong Jupiter indicates a bit of hope for the economy, at least in the very short term. Opposing Saturn, these two planets are at the peak of their cycle. This cycle reliably reflects the economic cycles (see my article on the current Jupiter-Saturn cycle here >)

However, the opposition between Jupiter and Saturn often coincides with a crisis in the economy. The first opposition of this cycle this May, with Jupiter strong in Pisces, will perhaps give cause for optimism. Unfortunately, I doubt this optimism will last. Jupiter and Saturn, when they move into the cardinal signs of Aries and Libra, will join Pluto in Capricorn and Uranus in Aries in the T-Square which will be at its strongest in the summer months of June and July. I foresee more shocks and upsets to the economy to come. I really hope I am wrong.

If you have a vote, be sure to use it well.