In The Jupiter Uranus Cycle – Science, Discovery and Revolution, I presented an overview of the cycle and detailed some of the amazing scientific, technological and political developments that occurred under Jupiter-Uranus alignments. 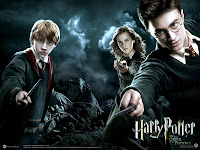 When I was doing research for the first article I found that the Jupiter Uranus conjunction of 1997 spawned two instances of remarkable literary success both of which ballooned into something massive and created a lasting cultural legacy.
It was in 1997 that JK Rowling published the first Harry Potter novel, the beginning of one of most successful series of novels ever published, selling many millions of copies and breaking sales records worldwide. Rowling has since been credited with starting a renaissance in children’s literature and with bringing the written word back into people’s homes, paving the way for many of the other successful children’s and fantasy fiction authors who followed.

Also in 1997, the paperback edition of Bridget Jones’s Diary was published by Helen Fielding, a book following the fictional adventures of a hapless 30-something single woman. The book and its sequel enjoyed massive worldwide success and led to two equally successful movie adaptations. Named as one of the ten novels that best defined the 20th century, Bridget Jones’s Diary seeded the vastly popular ‘chick-lit’ genre of humorous and confessional fiction which addresses the issues and concerns of the modern career women.
When I looked at the birth charts for Fielding and Rowling, I discovered that they were both born under Jupiter Uranus squares, in 1958 and 1965 respectively. That they both went on to publish their most famous works under a Jupiter Uranus conjunction demonstrates how they each fulfilled the Jupiter-Uranus promise of their natal configurations beautifully.
There are of course many other factors in the charts of both women which point towards their talent and their success, but their natal resonance with the Jupiter-Uranus cycle and the timing of their most successful published works, I think has a lot to say about how Jupiter-Uranus alignments so often coincide with the beginnings of phenomenally big successes that grow and grow into something much bigger than themselves. Both books had been in print for a while before they really took off. Word of mouth recommendations played a large part in their early success, after which the media caught on, turning both writers into ‘overnight sensations’!
Phenomena that seems to become suddenly huge and influential, but in actuality has been around for quite a while (Fielding wrote a newspaper column about the fictional Bridget Jones for a couple of years before the novel came to popular mass attention), seems to be a hallmark of the Jupiter-Uranus effect. It also seems to be the case that the influence of these phenomena eventually reaches an unexpectedly large scale. For example, Harry Potter is now so much more than just an enjoyable series of books, just as Stonewall became so much more than just a violent protest against an unfair police raid (as discussed in my previous article in terms of uprisings, protests and revolutionary events).

Harry Potter went on to become a massive industry, a big brand in its own right. It’s not only made Rowling as rich as the Queen (reportedly!) but it’s also made huge stars of the young kids who were chosen to represent the book’s characters on the big screen. As for Bridget Jones, it too made a lot of money for a lot of people and made a big star of Renée Zellweger who played Bridget in the movie version. More than that, it defined a whole generation of 30-something female ‘singletons’, giving them freedom from the old-fashioned spinster label and allowing them to enthusiastically embrace single life as long as it lasted. It also created a very hungry audience for the many new female writers who followed in Fielding’s wake with stories and characters that their readers could really identify with.

In Cameron’s chart (pictured below) Jupiter is conjunct Uranus in Cancer, in t-square with Neptune in Libra and Chiron in Capricorn. Jupiter-Uranus also trines his Moon in Pisces, which in turn is quincunx Neptune. It’s easy to see how these configurations reflect the themes of both movies. Avatar is rich with spiritual themes, idealistic ecological messages and a strong healing metaphor in which the wounded hero saves the Na’vi people and himself becomes whole again. Titanic is ultimately a tale of epic, undying, transformational love, that evokes a sentimental romanticism for a bygone age. The depiction of the ship itself as huge, indomitable and magnificently opulent, serves to magnify the immense tragedy of its sinking. Underlying themes of compassion, belonging and sacrifice strongly permeate both movies. 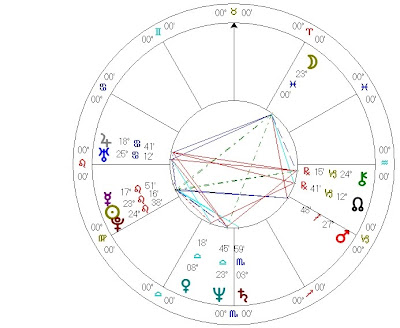 Cameron’s natal Mercury, Sun and Pluto stellium in Leo also describes the fact that his movies are huge productions, peppered with noble heroes, dramatic, over-the-top story lines and deeply intense transformational themes. Saturn in Scorpio, un-aspected save for creative quintiles to Pluto and the Sun, provides the opportunity to diligently transform his (probably) obsessive visions and desires into tangible creative reality through hard, hard work.

Interestingly, Cameron also describes himself as a scientist as well as a film maker and is noted for his contribution to underwater filming technology, another wonderful expression of his natal chart generally and his watery Jupiter-Uranus-Neptune-Moon configuration specifically.

It may be a while before we get to understand the next big Jupiter-Uranus influenced creative phenomena, scientific discoveries and technological advancements, but I’m sure we will have great fun finding out!

Please see The Jupiter Uranus Cycle – Science, Discovery and Revolution, for an overview of the Jupiter-Uranus themes and for astrological data for the current cycle.

What other astrology bloggers are saying about the Jupiter-Uranus conjunction
Jupiter-Uranus ‘rocks your world’ at Depali Desai’s Celestial Space Astrology
Lynn Koiner looks at what the conjunction might mean for you, depending on where it falls in your chart
A Saturn Perspective from Elsa Elsa in Jupiter Uranus - The Truth Will Set You Free Redux
Observations on Jupiter-Uranus in Aries Colliding with Saturn-Pluto from Libra Seeking Balance
John Townley looks back at the historical meetings of Jupiter and Uranus in Aries