Uranus, Fashion and the Roaring Twenties

I've noticed that in the fashion shows and fashion magazines the 1920’s flapper style is back into vogue, along with a renewed interest in 20’s music, dance and literature. A new film of Fitzgerald’s The Great Gatsby is in the making, twenties set TV drama Boardwalk Empire is a huge hit and a new book about the decade, Anything Goes, has just been published. Even my local pub is offering lessons!
What prompts old trends to recycle themselves? I’m not a style expert, but I do know a bit about astrology and there is a striking similarity between the astrology of now and the astrology of the twenties. Therefore, it’s no surprise to me that what was considered stylish then is considered stylish again now.
In 1919-20 Uranus moved into Pisces, then it flirted between Pisces and Aries through 1927, before settling into Aries in 1928. In 2010, we had the same scenario when Uranus moved into Aries for around four months before going retrograde back into Pisces.

The Roaring Twenties are known as a decade of glamour and decadence. After the devastation of World War I, suddenly everyone wanted to party and Uranus in Pisces was there to offer glamour to the masses, along with more freedoms and exciting technical innovations. Women in particular were empowered. They gained the vote in the and and had experienced a taste of independence and self sufficiency from going out to work when their men were away fighting. In response, fashionable, freshly emancipated young women shocked their elders by rebelling against the status quo in a glamorous way. They cut off their hair, discarded their mother’s restrictive corsets, daringly raised their hemlines and took to drinking and dancing the night away in the speakeasies. The flapper girl was born. 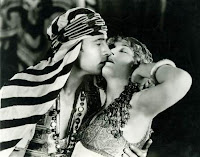 Uranus in Pisces is also about the collective ‘illusion’ of glamour and this was the age of the first great movie stars including Mary Pickford, Douglas Fairbanks, Greta Garbo, Rudolph Valentino and Charlie Chaplin. An interesting side note is that these were the silent movie stars and Pisces is one of the ‘mute’ signs in traditional astrology. Nevertheless these big stars made a big noise in the collective, with huge studio PR machines behind them feeding the public’s insatiable appetite for shocking tales of their glamorous romantic liaisons, lifestyle excesses and exciting scandals.
Doesn't that sound familiar, having just been through Uranus in Pisces ourselves? A huge multi-billion dollar industry has grown from our fascination with the glamorous, the rich and the famous. We are fed a daily diet of stories (most of which we shouldn't believe) about the latest shenanigans of the celebrated few, to make us feel an illusion of closeness to them and to encourage us to buy into the collective dream. Hell, we can even ‘tweet’ and ‘follow’ them online! Perhaps because of the Uranus in Pisces mutual reception with Neptune in Aquarius many of us felt that these elevated roles were within our reach, that we too could become idealized versions of ourselves and thanks to reality TV and the glossy gossip mags, ‘famous for being famous’ became a new, aspirational job title.
For the 1920’s the collective party was over by October 24, 1929, when the stock market crash plunged the world into deep economic depression. By this time, Uranus was settled into Aries and between 1930 and 1936 Uranus in Aries and Pluto in Cancer were in a cardinal square relationship, with the exact alignments occurring between 1932 and 1934. During this period, as the world struggled to lift itself out of the depression, the stage was being set for the struggle of World War II.
Compare, this with the current times. The age of boom and spend came to an abrupt end around 2008 while Uranus was still in Pisces (under Saturn-Uranus and Saturn-Pluto alignments), leading to a world recession. Now that Uranus is in Aries, just like in the twenties, Uranus-Pluto cardinal squares are upon us, their influence spanning from 2009 to 2018, with the exact alignments occurring between 2012 and 2015.
We will have to wait and see what the fashion world brings our way during these coming times, but just like the planets, fashion runs in cycles, constantly back-referencing itself. In our current age of austerity, perhaps it’s too early for the fashion world to idealistically re-imagine our most recent age of glamour and illusion during the early Uranus in Pisces years, so instead is harking back to the glamour of a Uranus in Pisces transit from a bygone era.
If you want to find me on a Thursday evening from now on, I’ll be in the pub, flirting, sipping a cocktail and trying out my new moves!
With love,
Mandi
http://www.mandilockley.com/
at March 10, 2011