A Uranus in Aries Brainstorm 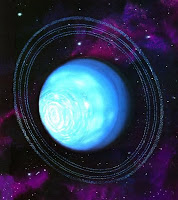 The most exciting astrological news of the month, by far, has to be the ingress of Uranus into Aries on 27/28 May (full data below).


Here are a few words and phrases I thought up that evoke the spirit of Uranus in Aries. I was going to mould them into artful narrative prose, but then I thought of the crazy immediacy and impatience of this ingress, so decided to present it as a raw list. Make of it what you will! In no particular order….. 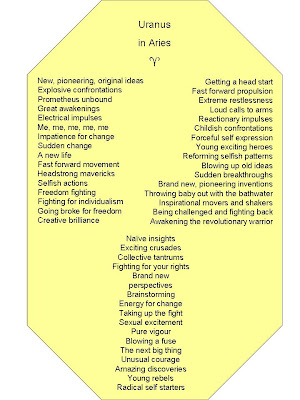 And here are some great phrases from the Uranus in Aries blog-a-thon collection at CJ Wright’s blog:
Heads up for the accident prone
Claiming a self-reliant future
My rights, every day
Build yourself a fire-pit and other advice from Aries types: 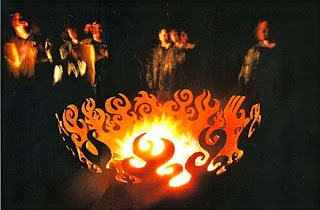 *Build a fire pit and light it when you’re feeling down it will really cheer you up, but make sure you do it safely!
Good advice from a great friend of mine who has lots of Aries and lots of Virgo in her chart.
Never lose your nerve!
The motto of a good family friend, very successful man, very fiery.

Just do it and worry about it later!
Perhaps not advice that would suit everybody, this is from an Aries Sun-Leo Moon-Sag ASC friend who is also very successful. Mind, she does get herself in an awful pickle from time to time, but I am always very impressed by how she bounces back so quickly – the fire spirit and resilience serves her well.

Have faith in yourself
From a sunny young man I know who has an Aries Moon and a Leo Sun and Ascendant. 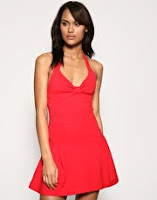 Today is OK, but tomorrow will be better, so let the past be and move on.
An Aries Moon character I know who genuinely never bears a grudge.
My advice? Wear red!
And why not, it’s a colour that’s surprisingly flattering on most people. If you don’t often wear red, try it, it’s a good feeling. It's actually works well if you lack fire in your chart, as it’s a safe way to embody the element’s spirit.

As synchronicity would have it, a minute after I posted this I discovered that one of the bloggers I follow - The Bloggess - just today posted about her desire for a red dress, so I'm slipping the link in here. She says "I want, just once, to wear a bright red, strapless ball gown with no apologies. I want to be shocking, and vivid and wear a dress as intensely amazing as the person I so want to be". What fabulous Uranus in Aries behaviour - ladies take note! Read more.... N.B. the red dress pictured above-left is available from http://www.asos.com/

Finally, Uranus in Aries is a good time to get to know and love your natal Mars, which will doubtless be activated by this Uranus transit, because Mars rules Aries.

Data for Uranus in Aries:

What Other Bloggers Are Saying About Uranus in Aries

Uranus in Aries: Claiming a Self Reliant Future is an amazing collection of quirky, interesting and helpful articles on Uranus. Not to be missed!
Mary Plumb is Curious about Uranus on the Mountain Astrologer blog
Depali Desai discusses the Uranus into Aries ingress in the context of the Sagittarius Full Moon
Julie Demboski asks: What Does the Group Want?
A great overview of Uranus in Aries from Astrogrrl.com
Meanwhile, if you’re already feeling nostalgic for Uranus in Pisces, see Donna Cunningham’s moving retrospective: Three Things I’ve Loved about Uranus in Pisces

*The fire pit featured is available via: http://johntunger.typepad.com/artbuzz/2005/05/recycled_steel_.html or for instructions on how to build your own cheaply go to: http://www.ehow.com/how_2004142_build-a-firepit.html

Email ThisBlogThis!Share to TwitterShare to FacebookShare to Pinterest
Labels: Uranus, Uranus in Aries